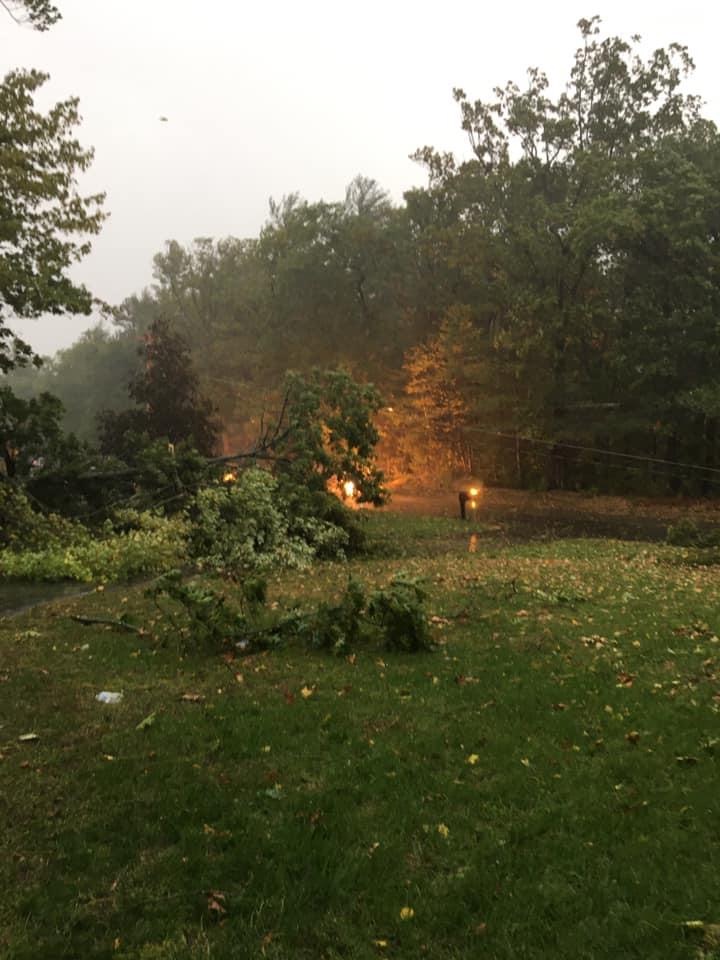 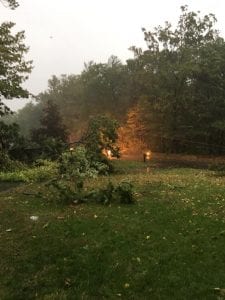 A fire broke out on Springdale Road during the fast but furious storm Oct. 7, 2020. (KARRIE WELCH PHOTO)

Soon after the storm passed, residents began assessing the damage left behind.

Karrie Welch, a Springdale Road area resident said she had a tree come down, downed live wires and a fire  at the end of her driveway.

Lisa Stowe, communications and marketing manager for WG&E, said the storm wasn’t what they expected.

“It was a surprisingly significant storm,” she said Thursday. “At the height yesterday we had between 2,000 and 3,000 customers without service. By morning we had gotten that number down to 500 and now we’re around 300. We’re grateful for the support of mutual aid crews from Chicopee Electric Light and Russell Municipal Light Dept as well as our on-call contractor Hawkeye and tree crews from Asplundh.”

Stowe said the power company tracked the storm all day and “knew to expect high winds” but  “it’s never 100% clear where weather will go but we clearly took a significant hit. Thankfully, WG+E spends a lot of time and resources on good tree maintenance which reduces the effect of storms on our utility lines.” 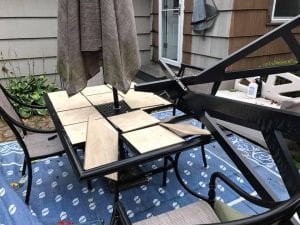 Winds of up to 74 mph tore through a Western Avenue backyard during the fast but furious storm Oct. 7, 2020. (MADISON WALLIS PHOTO)

Western Avenue resident Madison Wallis posted photos of damage to her backyard on social media and said the storm was quick, but scary.

“I was absolutely terrified,” said Wells. “One minute it’s nice and the next it’s windy and pouring. I just grabbed my pets and ran into the kitchen then saw this huge tree down in my backyard and ran downstairs with my pets.”

When the storm passed, she went back outside.

“After it lighted up I went outside to see the damage and the whole tree was in my shed and my canopy was blown down, bent, and broken,” said Wallis.”I saw that the tree was out of the ground. I was just in shock that that big of a tree came down in my backyard. Now this is the first tree down since I have lived here with my parents (19 years) and we lived through snowtober, the hurricane and multiple severe thunderstorms and had no problem with trees coming down. It’s absolutely terrifying even though it wasn’t for that long.” 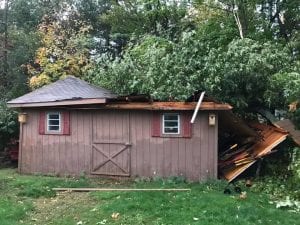 A tree fell on a shed on Western Avenue Wednesday. (MADISON WALLIS PHOTO)

City police and fire departments responded to multiple calls as did the Westfield Gas & Electric (WG&E).

WG&E crews immediately began efforts to restore power and continue to do so, however most residents had power as of Thursday.

“At this time, we are continuing to address some remaining larger pockets without service and then will turn to individual house services which do not have power,” said Stowe mid-day Thursday. “Clearing downed trees and pole sets are both time consuming tasks that have to be completed before we can finish restoring service. We expect to have many services restored by the end of the day. Crews will be working into the night and everyone should be restored by some time tomorrow.”