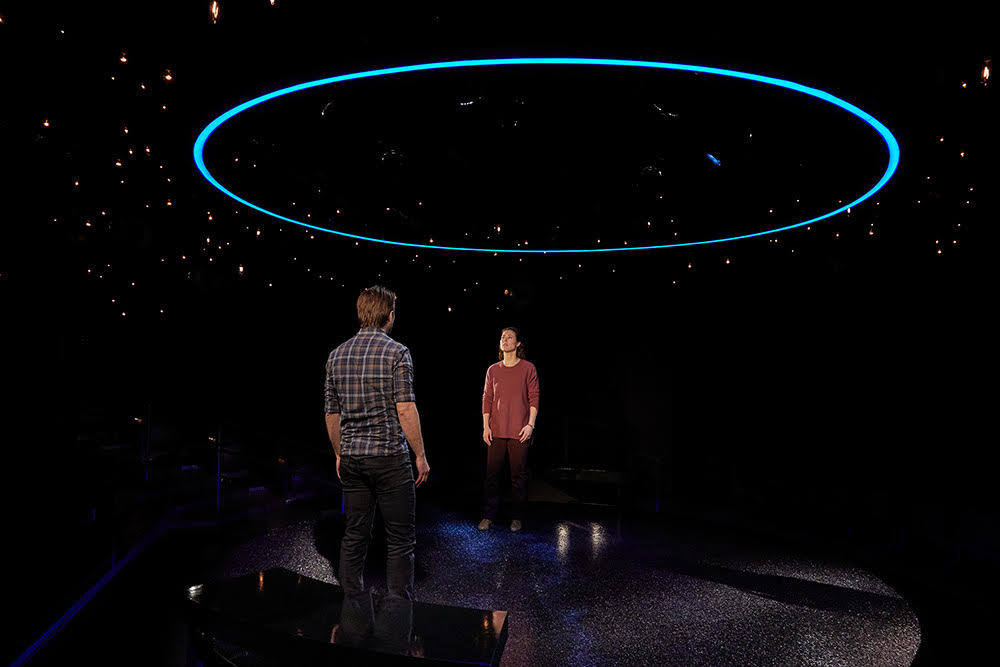 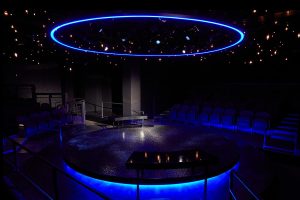 Theaterworks begins the New Year with a production of Nick Payne’s inventive Constellations, a play that completely fascinated me, when I saw a production at Berkshire Theatre Group two summers ago. Artistic Director Rob Ruggiero, back on his home turf after staging the thrilling production of Rags at Goodspeed Musicals, helms Payne’s portrait of a physicist and a beekeeper, who meet, fall in love, drift apart, replay their romance, and imagine how it will play out in a brisk one-hour play that turns time and space upside down.

Nick Payne is one of Britain’s most exciting up-and-coming playwrights. The thirty-something writer saw Constellations make its world premiere at London’s Royal Court in 2012, before moving to Broadway in 2015, where it starred Jake Gyllenhaal in his Broadway debut, opposite Ruth Wilson. Constellations has been produced at several regional theatres, and Payne’s new TV series, Wanderlust, which stars Toni Collette, premieres on BBC this year–it will be streamed in the USA on Netflix. 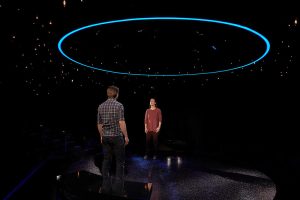 Allison Pistorius and M.Scott McLean in Constellations at TheaterWorks. Photo by Lanny Nagler.

Rob Ruggiero’s staging is cinematic on many levels, close-ups, flashbacks, instant replays, all part of Payne’s imaginative script, and part Jean Kim’s theatre-in-the-round style set. In his arena staging, Ruggiero and actors give each section of the audience equal billing. Kim’ playing area is a large circle, illuminated by a large circle above and dozens of small lights, some twinkling, that place the audience in the constellations of the sky. Phillip Rosenberg’s lighting is stunning, and Michael Micelli’s sound design is superb. A highlight of this production is its original score, composed and performed by Billy Bivona, which really sets tone, accompanies the drama, and seems, at times, improvisational, which showcases Bivona’s artistry.

As beekeeper and physicist, M. Scott McLean and Allison Pistorius give intricately entwined performances. Their British dialect is spot-on; their ability to play to each other and the audiences completely surrounding them, is effortlessly synchronized. As their relationship evolves, going through awkward patches past, present, and future, they balance humor, emotion, and timing. 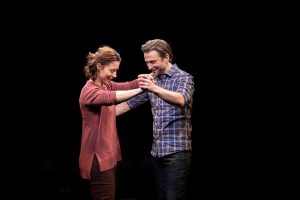 Allison Pistorius and M.Scott McLean in Constellations at TheaterWorks. Photo by Lanny Nagler.

Having seen a splendid production of Constellations before coming to TheaterWorks, I knew the premise and the playwright’s intent. The TheaterWorks production emphasized the dynamics of relationship building that I’d forgotten in the 18+ months, since I’d first seen the play. Ruggiero, his cast, and creative team are superlative, and TheaterWorks continues to astound and satisfy as a theatre company that showcases contemporary voices with something to say.