HARTFORD – Hartford Stage and Westport County Playhouse launched their co-production of “A Song At Twilight”, Noel Coward’s final play, which marks the return of beloved former Hartford Stage Artistic Director Mark Lamos to Hartford. (He’s now in the same role at Westport County Playhouse).
Sir Noel Coward was best known for his crisp and witty British drawing room comedies like “Blithe Spirit” and “Private Lives”, in which he played the leads in London and New York. His catalogue of bubbly songs like “Mad About The Boy” and the musical “Sail Away” (written for Elaine Stritch) are standards. Coward was also known by the smart set to be gay, but closeted, so as not to violate British law against homosexuality. 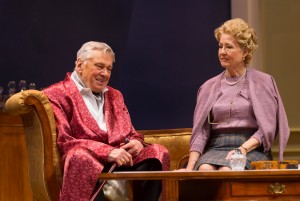 Brian Murray and Mia Dillon in “A Song At Twilight” at Hartford Stage. (Photo by T. Charles Erickson.)

In 1965, Coward wrote his final play, “A Song for Twilight”, in which a well-known author is about to be outed by a former female lover, who wants to publish his letters to his male lover for financial gain or revenge, or possibly both. Coward played the lead in London, opposite Lilli Palmer, and alluded that “A Song for Twilight” is more Somerset Maugham’s life story, as opposed to his.
“A Song for Twilight” had a brief Broadway run in 1974 on a bill with another play in an evening called “Noel Coward in Two Keys”. Hume Cronyn, Jessica Tandy, and Anne Baxter starred. 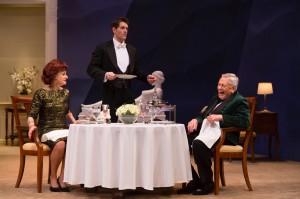 Gordana Rashovich, Nicholas Carriere, and Brian Murray in “A Song At Twilight” at Hartford Stage. (Photo by T. Charles Erickson)

There is some of the crisp repartee reminiscent of Coward’s earlier works, witty verbal jousts, and some laughs, but all are overshadowed by Coward’s much more serious discourse on public lives verses private lives, the closet, and the difficulty of being part of a minority in repressive times. With the marriage equality and LGBT rights movement in full-swing now, “A Song at Twilight” maintains a relevance, as it recalls the ethics of an earlier era which really is not so long ago.
Mark Lamos gives “A Song at Twilight” a top-notch staging, and his production team and cast are superb. Alexander Dodge’s set, a deluxe Swiss resort hotel suite, is stylish. Fabio Toblini’s costumes are swank, especially a 1960’s cocktail dress for Carlotta, the author’s ex-lover, an actress. Matthew Richards’ lighting design and John Gromada’s music and sound design add a deluxe sheen to the stage.
“A Song at Twilight” provides challenging acting roles for some of today’s theatre’s brightest stars. The multi-Tony Award-nominated Brian Murray, a major presence on Broadway since “Rosencrantz and Guilderstern are Dead” (which ran on Broadway at the same time “A Song at Twilight” premiered), plays the crusty author Hugo Latymer, with panache. Mia Dillon, a Broadway actress for decades, plays Latymer’s current wife, a proper German who loosens up after a couple of drinks. Gordana Rashovich, who won numerous awards nationally for her performance in “A Shayna Maidel”, offers the stand-out performance as Carlotta, the bitter ex.
If you’re looking for vintage Coward comedy like “Private Lives”, there are always productions in area theatres. One’s playing at Shakespeare & Company, as I type. But for devotees of the Coward wit, “A Song at Twilight”, in which Coward exposes his and others’ real private lives, has some substance. The leading character’s dilemna as to expose himself isn’t much different than Alec Baldwin’s recent discourse about public figures protecting their private lives, or an athlete’s decision to live openly.