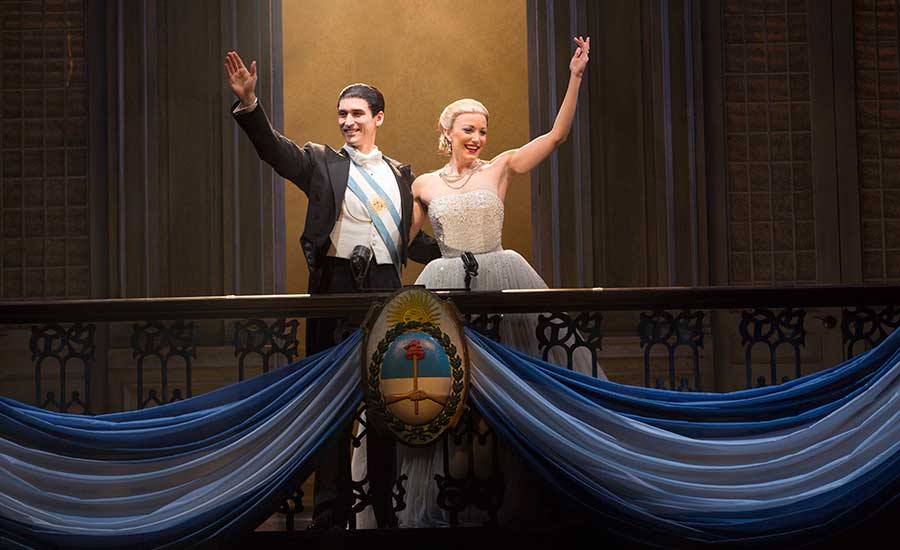 HARTFORD – Eva Duarte Peron was an ambitious small town girl on a mission. Using her street smarts, her charisma, and her other talents, she worked her way to the top, first as an Argentine actress and then as First Lady. She lived high, lived fast, and died young. But, she never forgot “Los Dascamisados”, the poor she grew up with, as a girl from the slums, and her people adored her.
Tim Rice and Andrew Lloyd Webber, charmed by the story of Eva Peron and her rapid rise to celebrity, created “Evita” as a “concept album” in 1976. A stage musical version opened in London in 1978, followed by an award-winning Broadway production, staged by Harol Prince. That production put Patti LuPone and Mandy Patinkin on the map. Madonna starred in the movie version, and Ricky Martin headed the cast of the 2012 Broadway production, from which this tour was adapted.
“Evita” offers some musical gems from the sizzling “Buenos Aires” to the gallant “Waltz for Eva and Che”. Composer Lloyd Webber reached his pinnacle with his later “The Phantom of The Opera”, but “”Evita” has a challenging score, occasionally repetitive, but full of nuance, and appreciation of the Argentine tango music. 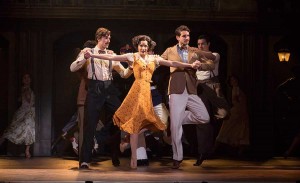 On a unit set well-designed by Christopher Oram (who also designed the costumes), director Michael Grandage and choreographer Rob Ashford (whose Broadway staging was recreated by Seth Sklar-Heyn and Chris Bailey respectively) give the all sung-through musical a fast pace. The ensemble tableaus are moving, and some of the dancing, especially “Buenos Aires”, sometimes sizzles. I liked Neil Austin’s lights and Zachary Borovay’s projections of newsreel footage of the real Perons.
In the original Broadway production, focus was given to the actress playing Evita. Some of the tour-de-force Evitas included Patti LuPone (who originated the role and won a Tony Award in the process) and Florence Lacey (my personal favorite). They turned the show’s most famous anthem, “Don’t Cry for Me, Argentina” into a showstopper. Caroline Bowman as the Evita on this tour negotiates all of the pyrotechnics written into Andrew Lloyd Webber’s score, and acts, and dances well, but she’s shy of the sizzle to make the performance a knock-out. Max Quinlan’s “Che” (essayed on Broadway by Mandy Patinkin and later Ricky Martin) is outstanding, as is Sean MacLaughlin’s Juan Peron, and Christopher Johnstone’s tango singer Magaldi. The chorus is superb.
Audiences unfamiliar with “Evita” will find the story of Eva Peron fascinating. Those who know the show will appreciate the staging and choreography. And those who only know “Evita” from the Madonna movie, make note: the stage version is far more theatrical.
“Evita” runs through September 28. Another Andrew Lloyd Webber musical, “Joseph and The Amazing Technicolor Dreamcoat” follows, October 14-19, with Ace Young and Diana DeGarmo in the leads.
The Bushnell presents “Evita”. Book and lyrics by Tim Rice. Music and Orchestrations by Andrew Lloyd Webber. Original direction by Michael Grandage, recreated by Seth Sklar-Heyn. Original choreography by Rob Ashhford, recreated by Chris Bailey. Scenic and costume design by Christopher Oram. Lighting design by Neil Austin. Sound design by Mick Potter. Cast: Caroline Bowman as Eva. Max Quinlan as Che. Sean MacLaughlin as Peron. Christopher Johnstone as Magaldi. Krystina Alabado as the Mistress. Through September 28. The Bushnell, Hartford, CT. For tickets: 860-987-5900 or www.bushnell.org.
Mark G. Auerbach studied theatre at American University and the Yale School of Drama. He’s worked for arts organizations and reported on theatre for newspapers and radio.