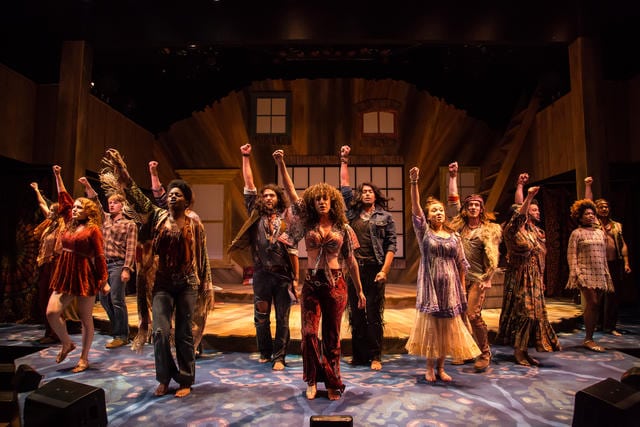 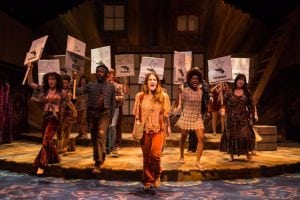 Kayla Foster and the company of Hair at Berkshire Theatre Group. .Photo by Emma Rothenberg-Ware

It’s hard to believe that Hair is 50 years old. The bold, daring, groovy, “make love not war” musical that introduced Broadway to the rock idiom, is getting a high-octane revival at Berkshire Theatre Group’s Unicorn Theatre. This Daisy Walker-helmed musical, with energetic choreography by Lisa Shriver packs the same punch that its original did a half century ago. Galt McDermot’s music, well-performed by Eric Svegcar’s combo, has a bunch of gems, from “Aquarius”, “Good Morning Starshine” to “Let The Sunshine In”. Gerome Ragni’s and James Rado’s book and lyrics seem still relevant, in light of the social unrest and divisiveness so much a part of today’s world. What a welcome revival of a musical that didn’t become dated with time. Kudos to director Daisy Walker for keeping it fresh. 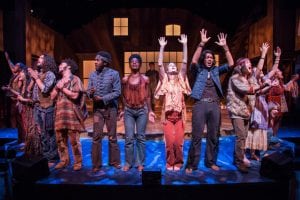 The company of Hair at Berkshire Theatre Group. .Photo by Emma Rothenberg-Ware

Hair has a short and simple plot. Claude is drafted and runs with a tribe enjoying the best of sex, drugs, rock and roll. He meets  up with Berger, a rebel, and other members of a New York City commune. They joke, toke, rebel, and sing and dance in the moment. Jason Simms has built a spacious urban set at the Unicorn to accommodate the large cast, and Lisa Shriver’s infectious choreography. Shane E. Ballard has designed some hippie chic outfits. Patricia M. Nichols’ lighting is superb, and Nathan Leigh’s sound design balances a superb rock combo and the ensemble voices.

There are so many stand-put performances in this young ensemble. Latoya Edwards as Dionne turns the opening “Aquarius” into an instant showstopper. Andrew Cekala is a terrific Claude, as is his pal Brandon Contreras as Berger. .Livvy Marcus’ crystal voice, Kayla Foster’s strong belt turns “Easy to Be Hard” into a powerhouse. 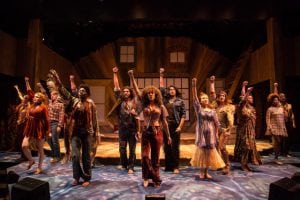 The company of Hair at Berkshire Theatre Group. .Photo by Emma Rothenberg-Ware

For many people of a certain age, Hair may be a nostalgic trip down Memory Lane. For those discovering the musical for the first time, it’s a revelation. Berkshire Theatre Group’s production is a welcome addition to the summer theatre scene.