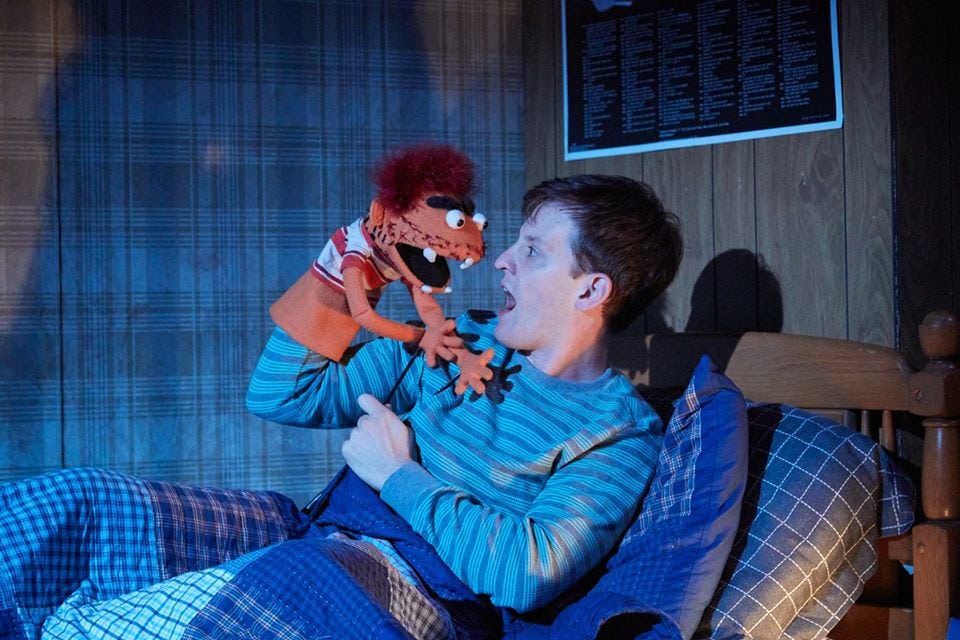 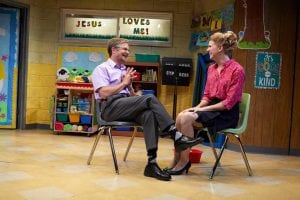 Make note all ye pearl clutchers who find the original cast recordings of Avenue Q and The Book of Mormon lewd and salacious, yet listen to them in private again and again. Tyrone, the potty-mouthed puppet in Robert Askins’ richly satisfying Hand to God makes either musical seem as pure as The Sound of Music. Tyrone is foul-mouthed, rude, and not for the faint-of-heart, while Hand to God is worthy of all of the accolades it’s acquired in addition to a Tony Award nomination for “Best Play”.

Robert Askins’ recent Broadway hit is set in Cypress, Texas, where churches  and conservative values abound. Jason, a young man, attends a puppet ministry at his church, tended to by Pastor Greg, where Jason’s mom, a recent widow,  puts on puppet shows to share the parables of the gospel, and teach young children the difference between good and evil. Jason’s puppet, Tyrone, becomes Jason’s right hand man, freely speaking and acting out the thoughts of Jason, who is overcome with self-doubt and questioning who he is. Pastor Greg is interested in Margery, the mom, who in turn, is tantalized by Timmy, one of Jason’s contemporaries, a tough-talking, swaggering teen stud. Jason’s friend, Jessica, is interested in him, after having already connected with Tim. Hilarity ensues over and over. 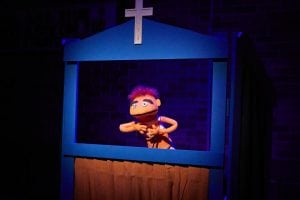 Tyrone in Robert Askins’ Hand to God at TheaterWorks. Photo by Lanny Nagler

Hand to God balances the gawdy with the heart-rending, and sometimes, it’s difficult to feel moved, when one’s sides ache from laughter. I don’t think I’ve laughed as much in any theatre of late, and I, who consider myself jaded and liberal, was slightly taken aback by the trysting puppets…more so than the trysting people. Let me add a note here: leave the kids home.

Nick LaMedica stops the show several times in the challenging double roles as the introverted Jason and his licentious puppet, Tyrone. This is one of those performances I won’t soon forget, and one of the best blendings of broad comedy and poignant sensitivity that I’ve seen. LaMedica’s co-stars are all polished, and very, very funny. Their sense of timing is superb. 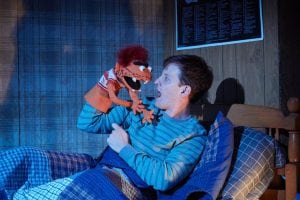 Hand to God is an hilarious finale to a very satisfying TheaterWorks season. Artistic Director Rob Ruggiero and company continue to curate fresh takes and new voices, by showcasing contemporary plays and playwrights with a bit of edge. TheaterWorks knows what makes a theatre season an adventure. I’m so glad I’ve had this journey at TheaterWorks.

Hand to God runs through August 26, but I venture a guess that most performances will sell out, as soon as the reviews appear.