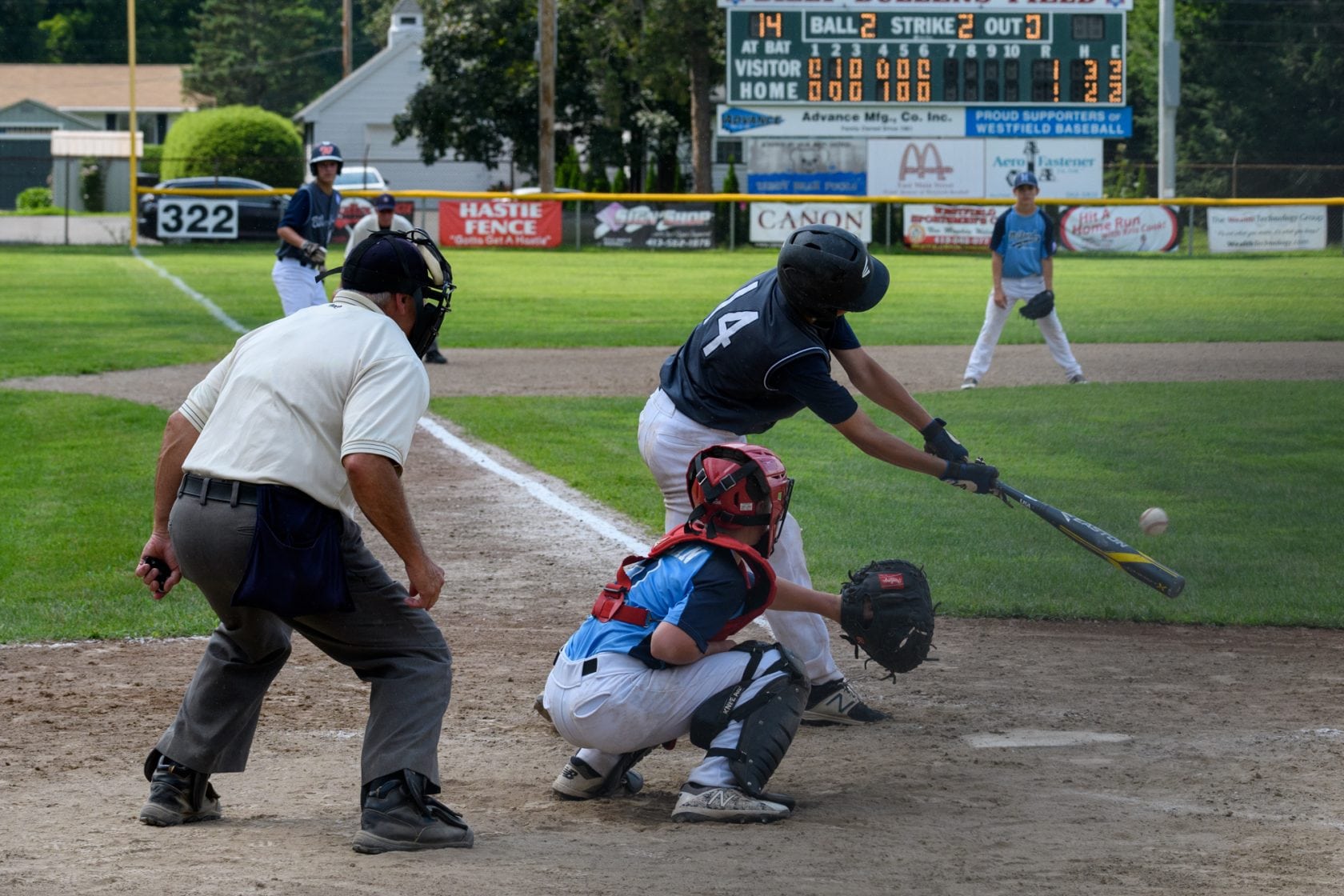 WESTFIELD – Just a few days ago, the Westfield Babe Ruth 13-Year-Old All-Stars were 0-2 and looking to bow out of the eastern regionals. Here we are a short time later and the Whip City’s host team is a win away from flipping the entire tournament on its head.
Westfield staved off elimination for the second straight game, rallying past Milford (Conn.) 3-1 Friday afternoon at Bullens Field.
“When we started Pioneer Valley, we weren’t clicking as a team,” Westfield manager Aaron Wagner said. “Midway through these kids hit their stride.” 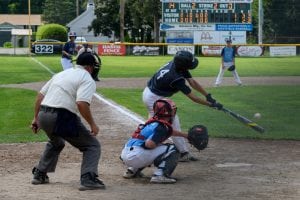 Anthony Shabowski makes solid contact for a hit that breaks the tie and puts Westfield in front of Milford (Conn.) 2-1 in the New England Regionals quarterfinals Friday at Bullens Field. (Photo by Bill Deren)

“We went into Central Mass, we played a great game, beat them pretty heavily. We lost a great game against Pittsfield that we should have won. We played Rhode Island tight until the extra innings. We should’ve won that game, and we should’ve beaten Nashua, New Hampshire. These kids are so close of putting it together. Today they did, and yesterday they did.”
Milford jumped out to the game’s first lead.
In the top of the second inning, Anthony Brosell drew a lead-off walk and advanced to second base on a wild pitch. Brosell came around to score on an infield error.
Westfield threatened to tie the game in the second when Jacob Wagner singled to lead off the inning and Liam Poole drew a one-out walk but the Whip City’s all-stars got a bit unlucky when a ball fell in between the defense in shallow center field. The umpires ruled an “infield fly” and Milford threw out the base runner going to third base to end the inning.
Westfield finally tied the game in the fourth. Josh Sturmer singled and stole second base. Wagner pushed him over on a ground out. Josh Mayo drove him in with a single to left field.
“We don’t need to pound the ball,” Westfield’s manager said. “We put the ball in play, we score runs. That’s the way to win baseball games.”
And that is exactly how it played it late in the game.
In the sixth inning, Westfield manufactured the winning run. Cam Lisowski walked, stole second base, advanced to third on a wild pitch, and scored on Anthony Shabowski’s RBI single to center field. A couple of miscues and some heads up base running provided some insurance.
Westfield pitcher Liam Poole allowed just two hits through six innings, striking out six batters. Reliever Josh Mayo tossed a 1-2-3 inning to close out the game.
With the win, Westfield advanced to Saturday’s semifinal game against Portland (Maine). First pitch at Bullens Field is at 11 a.m. Nashua (N.H.) will battle Milton, a 5-1 winner over Barre (Vermont), approximately around 1:30 p.m.