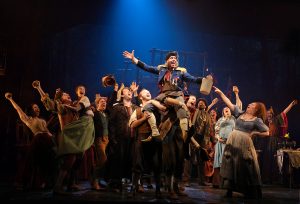 “Master of The House” from the national tour of Les Misérables. Photo by Matthew Murphy.

The most recent Broadway version of  the mega-musical Les Misérables plays The Bushnell in Hartford this week, and it’s cause for celebration. This musical blockbuster, always a crowd pleaser, has a new look, new staging, and new orchestrations, which give it a fresh look and sound. I was never a fan of Les Misérables, when I saw it on Broadway way back when, and on tour at The Bushnell probably 25 years ago. Cameron Macintosh’s new tour, which plays Hartford just a week after its premiere in Providence, is fresh, focused, and so well designed, staged, and performed, that it made a fan of me. The sold out opening night crowd applauded loudly after each signature tune, and gave the superb cast a well-deserved standing ovation.

Les Misérables premiered in Paris in 1980, and moved to London, where it opened in 1985, and is still playing. It’s a record-breaker, being the second longest-running musical in the world, after The Fantasticks.  Les Misérables moved to Broadway thirty years ago and, after Cats, began the Big Apple invasion of the high-tech, stupendous, over-the-top, power-ballad-filled musicals from London like The Phantom of The Opera and Miss Saigon. The original Broadway version ran until 2003, won eight Tony Awards including “Best Musical” and “Best Original Score”, toured the country, got repackaged in a concert version, toured again and returned to Broadway. There was a film adaptation, and the public never tires of Les Misérables, or Les Miz, as it’s affectionately known.

I found the sets, costumes, projections, and lighting to be superlative. Every inch of The Bushnell’s immense stage is full of frequently moving set pieces, and the projections add to the mood of the often dark Victor Hugo story, whose book, music, ad lyrics have aged well.. The new orchestrations by Christopher Jahnke, Stephen Metcalfe, and Stephen Brooker are a highlight of this production. They never overpower the singers, and they actually have moments of a subtle nature which I found missing in the original treatments of the completely sung-through, power-ballad laden score. 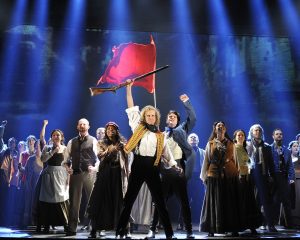 “One Day More” from the national tour of Les Misérables. Photo by Deen Van Meer.

Les Misérables is a big show, production-wise, one of the larger productions to come through Hartford of late, and it features a big cast, all of them giving fine performances individually, and as an ensemble. Some of them may look familiar. The Threnardiers, played by J. Anthony Crane an Allison Guinn are both Barrington Stage alums, he of Ragtime and she of On The Town. They provided the much needed comedy. The other standouts are new faces to me. Nick Cartell is a dynamic Jean Valjean, the man who goes to prison for stealing a loaf of bread. His rendition of “Bring Him Home”, perhaps Les Misérables signature song, is thrilling. Josh Davis as his nemesis Javert; Joshua Grosso as the student, Marius, and Melissa Mitchell as Fantine were terrific.

Les Misérables runs through Sunday, and according to The Bushnell’s publicist, tickets were, on opening night, still available for the remaining performances. But, once the reviews come out and delighted patrons post their euphoria on social media, tickets will become really hot.