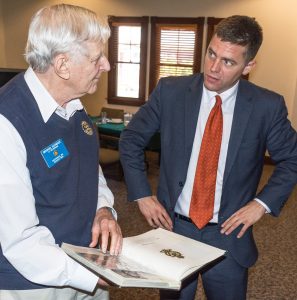 WESTFIELD – John Velis spoke at the October 2nd meeting of the Rotary Club of Westfield.  John is the state representative for Westfield, but he spoke to the group about his experience as a Captain in the Army Reserve.  Velis recently returned from exercises in Korea, and his assessment of the situation in Korea was very sobering.  He said that a war in Korea with the North, the US and our allies would win, but the casualties would be catastrophic.

Unlike the wars in Afghanistan and Iraq, a Korean war would be a conventional war involving tanks and infantry, air force, and navy.  A war would result in many casualties, far more than in recent conflicts.  Many of the casualties would be South Korean civilians.  The city of Seoul has 24,000,000 people, more than three times the population of New York City, living within the range of many of North Korea’s eight thousand artillery batteries along the demilitarized zone, the buffer between North and South.

A winning strategy would aim to take out the artillery batteries early in a conflict.  Another likely early target would be North Korea’s nuclear capable submarines.  In response to questions, John said that, an important consideration would be how to keep China out of a war. He also replied to a question about the 2018 Winter Olympics, that the games are outside of the range of the artillery. He explained that the tensions are very high right now between North and South, but South Koreans do not stop living their lives because things beyond their control produce tensions.  They anticipate that life and the Olympics will go on as planned.  May their hopeful expectations be fulfilled.