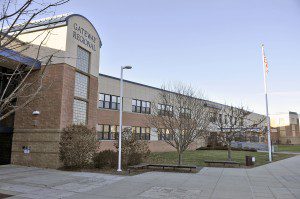 HILLTOWNS – The schedules have been set for Huntington, Russell and Chester to vote for the third time on the Gateway Regional School District’s budget for FY18, which began on July 1 of this year. Huntington and Russell have both scheduled Special Town Meetings to be held on Wednesday, October 18 at 6:30 p.m. On Monday, Chester’s Select Board scheduled a Special Town Meeting for Wednesday, October 25 at 7 p.m.
The three towns are the only ones of the six member towns required to vote again on the budget, because Blandford, Middlefield and Montgomery passed Gateway’s Budget Version 1 at their Annual Town Meetings in the spring. Those three towns had assessments for FY18 which were lower than FY17, based in part on their lower percentage share of students in the district. Four towns are required to vote for the budget in order for it to pass.
After the initial defeat in the spring, Gateway made $105,908 in cuts, which were reflected in Version 2. However, the reductions were spread among the six towns, and the impact on Russell and Huntington, which each have 30% share of the students in the district, was not great. Initially, Huntington was facing an increase of $141,684 over FY17’s assessment, and Russell, the largest increase of $196,570. Both towns were reduced by $7,118 in Version 2 of the budget.
Russell is also facing a loss of $150,000 due to a renegotiated lease with Westfield for the Russell Elementary School, which was cut from $250,000 to $100,000. Next year, the town will lose the $100,000 when Westfield students leave, and will also have to pick up $50,000 in utilities for the school and begin to repay $40,000 to $50,000 for the loan on the school building to the state, for a total of $200,000 in new expenses.
Chester’s increase in Version 1 was $14,406, which was reduced by $4,014 in Version 2. Both Chester and Huntington officials have said their second “no” votes at Special Town Meetings held over the summer were not based on an inability to pay the assessments.
At Chester’s Special Town Meeting on August 12, Board of Selectmen chair John Baldasaro said a main consideration this year were the high increases to Huntington and especially to Russell.
“There’s been a very clear shift in attitude among the towns. A number of towns are standing together supporting each other. If we lose another town, (Gateway) is no longer financially solvent,” Baldasaro said, referring to Worthington’s withdrawal from the district in 2015 and the financial pressures on Russell.
At the same meeting, Chester School Committee member Diane Dunn said the School Committee did a lot of work this year to organize the process to be more inclusive of the towns. The School Committee has scheduled five joint budget meetings with town officials for FY19 budget development. Facilitated meetings to look at the long-term picture are also being arranged.
“What we’re getting is obstruction in a budget that’s already created,” Dunn said.
At the School Committee’s vote on the third version of the budget last month, Gateway Regional Superintendent David B. Hopson said Version 3 of the budget is $54,000 lower than Version 2, and approximately $100,000 more than last year’s budget. Hopson also said that Version 3, with a bottom line of $16,035,958, does not change the current offerings which the students are already taking since school began.  The district said any more cuts would impact student services.
Gateway business manager Stephanie Fisk said the biggest reduction in Version 3 is the result of 6-7 new employees waiving health insurance.
“If one more town accepts the budget, then we have a budget,” Hopson said at the meeting.
For the third time this year, the town of Chester may be the one to decide whether the Gateway budget will pass, as their Special Town Meeting is the last to be held. In Version 3 of the budget, Chester’s assessment for Gateway is now $1,179 over last year.
If four towns do not pass the budget, the Department of Elementary and Secondary Educaton (DESE) will set a budget for FY18, which also happened in FY16, when the budget never passed four of the six towns by the deadline of Dec. 1. After the last attempt to pass a budget that year, DESE took control of the school for the remainder of FY16. Last year, the FY17 budget passed in May on its first try.
After taking over the district in 2016, DESE required Gateway to hire a consultant to work on some of the issues that arose during the budget discussions. Gateway hired a team from the Massachusetts Association of Retired Superintendents (MARS), who made several recommendations, one of which was to hold facilitated meetings with the towns to improve communication. Since then, the team from MARS has agreed to facilitate the discussions.
The first facilitated meeting will be held this Thursday at Gateway with the MARS team.