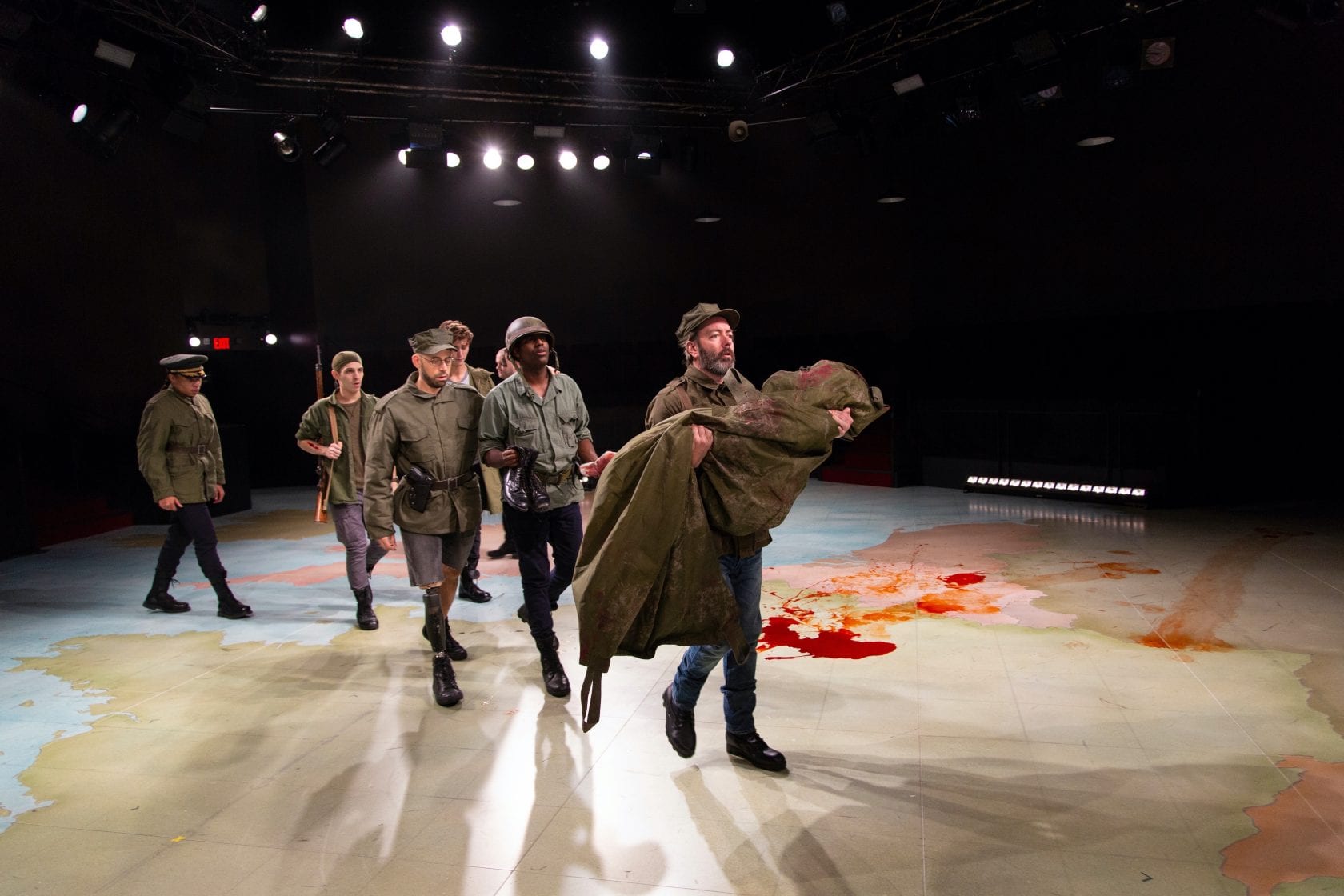 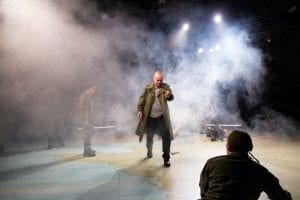 Hartford Stage is currently presenting Shakespeare’s history play, Henry V, as staged by Elizabeth Williamson. Shakespeare is annually on the menu at Hartford Stage, and along with Shakespeare & Company in The Berkshires, these are the only two places to see the Bard performed outside of university theatres and the occasional community theatre around here. That’s too bad, because if more people had their first experience seeing Shakespeare performed live, instead of being read in a high school English class, more people would appreciate what makes Shakespeare’s works worth the accolades over the centuries.

Williamson’s Henry V is theatrical, suspenseful,  and accessible. The playbill has a brief synopsis and timeline. To get the most out of this production, it’s not necessary to read the script or see the excellent 1999 Kenneth Branagh movie adaptation, although the latter is good. Hartford Stage has posted a series of videos to their website and Facebook with short interviews with Williamson and company. They really give a backgrounder.of the play. 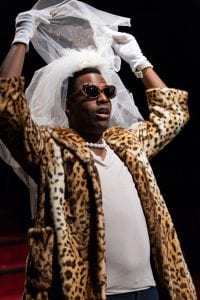 Henry V, written in 1599,  is the final part of a tetralogy, preceded by Richard II, Henry IV, Part 1, and Henry IV, Part 2. The original audiences would thus have already been familiar with the title character, who was depicted in the Henry IV plays as a wild, undisciplined young man. In Henry V, the young prince has matured. Set around the 1415 Battle of Agincourt during the Hundred Years War, new monarch Henry has to determine whether or not he should lead his country to war, and what is the price of power.

There are some novel, although not new, twists to this production. First, it’s staged arena-style in the usually proscenium or thrust stage on Church Street–a challenge for set designer Nick Vaughn, but a thrill for audiences seated where the stage usually sits. But, for those of us who grew up seeing musicals at the old Storrowton Music Fair in West Springfield, or the Mount Holyoke Summer Theatre, arena-style seating has been around a long time. Williamson uses the aisles and entrances of the theatre; smoke and fog adds an air of mystery, and Stephen Strawbridge’s lighting is purposely murky and elusive and most effective.

Williamson’s casting choices, however, are more novel. In Shakespeare’s day, all roles, male and female, were played by men. Williamson has gone for gender parity–roles male and female split equally by men and women. Some actors play both male and female roles. If an actor is expected to take on a different person when they go onstage, why would it matter is the different person were male or female? It works on Broadway every year, when the big fundraiser Broadway Backwards has men singing female showstoppers and vice versa. And, in London, Sondheim’s Company has just been revived with bachelor Robert turned into Bobbie, a bachelorette. It works, as it does in Henry V 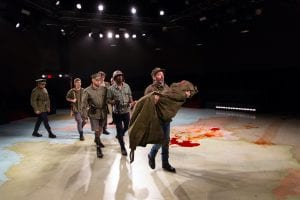 The cast of Henry V. Photo by T. Charles Erickson

Beth Goldenberg has designed some fabulous costumes, which defy period or time. They’re slightly military, slightly grunge, and look reminiscent of the wardrobes seen around the streets of Northampton, where college kids mix army-navy with hip.

The performances are all first-rate, and the company play multiple roles, dividing their performances equally around the arena. Stephen Louis Grush in the title role hits his stride most effectively in the second half of the play, where he plays commanding leader and woo’er to Princess Katherine of France. Peter Francis James is a superb narrator as Chorus. Baron Vaughn is funny as Mistress Quickly; and Kate Forbes, so magnificent in Hamlet a couple of seasons ago, is terrific as The Constable of France, Governor of Hafleur, and Duke of Burgundy.

I didn’t expect to like Hartford Stage’s Henry V, as much as I did. Seeing a leader forced to make choices for his gain or for his people, rings very real in today’s current political limelight.This well-conceived production puts theatricality front and center, and the production values are superb.