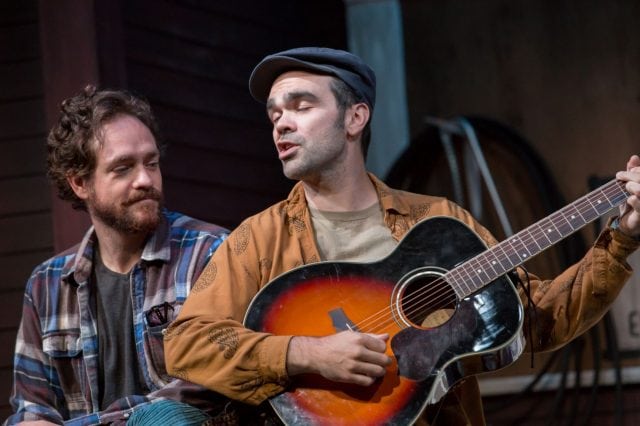 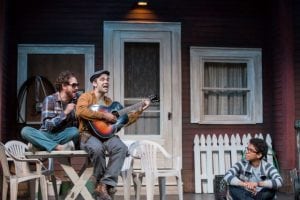 The Aliens is the story of two slackers, KJ, a college drop-out and Jasper, an aspiring novelist, both friends since doing music together. They’re biding their time as townies in a small New England town, which could easily be Amherst or Northampton. They’re not on the road to success, and they spend their days dreaming and reminiscing in an alley behind a cafe, when they meet Evan, a geeky high schooler who works at the cafe. KJ and Jasper “mentor” the shy and uncomfortable Evan, who as the play progresses, transitions from ugly duckling to swan. 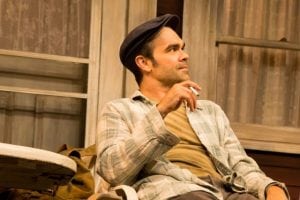 James Barry in The Aliens. Photo by Elizabeth Solaka.

Baker’s play is one of those slice of life portraits much in need of pace, and director Daniel Elihu Kramer, working on a fine set by Ed Check, places the emphasis on the characterizations of the three extraordinary actors. Each are terrific on their own terms, and together, they are the heart and soul of The Aliens. I wasn’t familiar with James Barry’s stagework, only his fabulous direction of Million Dollar Quartet at Berkshire Theatre Group, an his work as a musician with his album Embrace Yourself Tonight. He’s an engaging stage presence, who does get to show off his singing skills and guitar playing. Joel Ripka carries the lion’s share of the acting, and he’s commanding. Paul Pontrelli, nails the goofy and gawky Evan, a complete 180 degree turn from last season’s confident I and You protagonist. 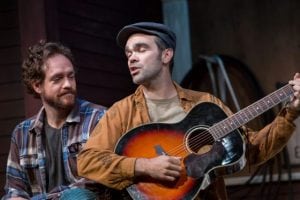 Joel Ripka and James Barry in The Aliens. Photo by Elizabeth Solaka.

Chester Theatre has been under-appreciated for many years, since it was co-founded by the late Vincent Dowling, former director of Dublin’s Abbey Theatre in 1990. During the tenure of artistic director Byam Stevens, Chester Theatre became a producer of contemporary plays, and since Daniel Elihu Kramer has taken the helm, the theatre’s programming has caught the attention of area audiences, who like the opportunity of experiencing theatre in an intimate space in the Chester Town Hall. I was only able to catch half of Chester’s offerings this summer, but based on what I’ve seen, i’m excited about seeing more and more of Chester’s offerings.