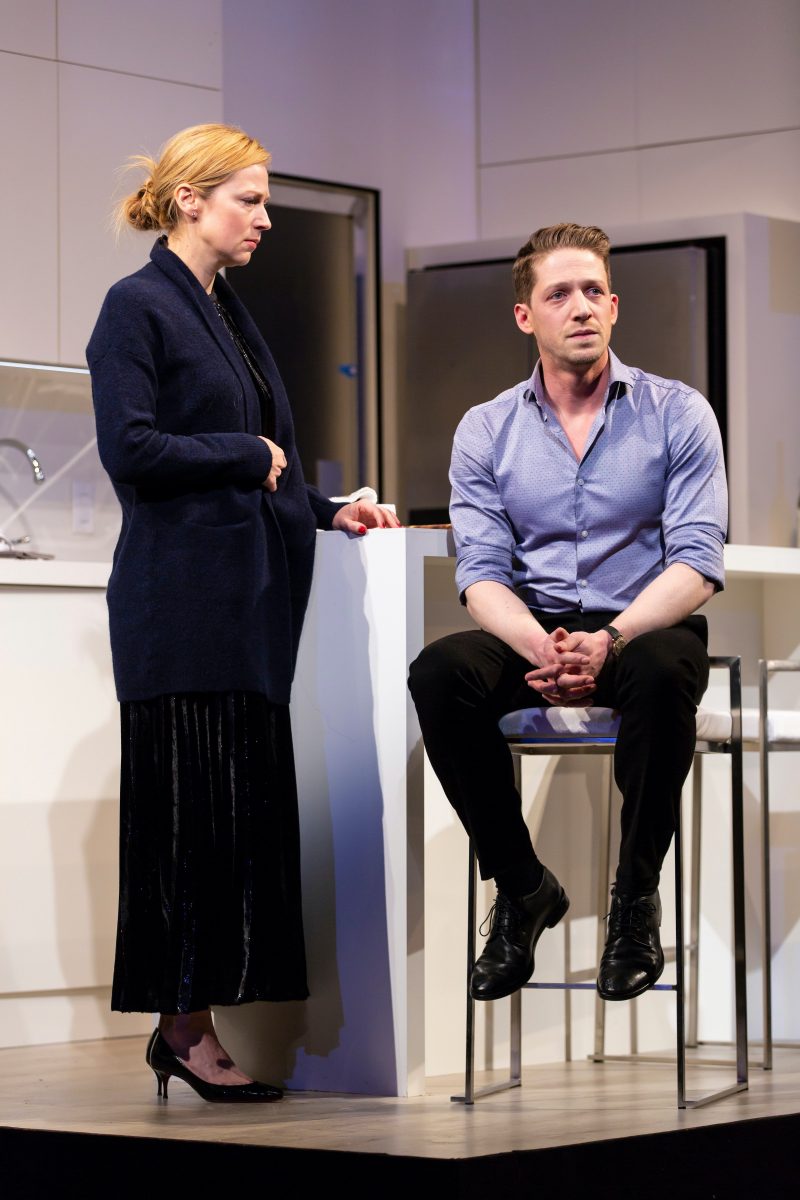 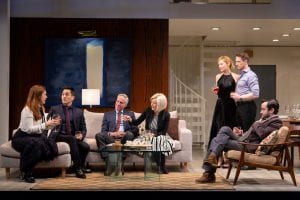 The cast of The Engagement Party at Hartford Stage.: Photo by T. Charles Erickson.

Samuel Baum’s The Engagement Party, having its world premiere at Hartford Stage, is a smart and funny comedy that turns into a slick thriller, and in its clever twists and turns over the course of its eighty minutes, will have you laughing one minute, and wondering whodunnit the next. Samuel Baum, the playwright who has made his mark in film, and television, has taken an octet of complicated characters, moved them through situations at lightning pace, leaving the audience breathless wondering who the culprit might be, and afterwards what motivated the subtle series of deceptions and whether these people can regain their lives.

Set in a swank Park Avenue apartment, richly designed by Alexander Dodge, who created the jawdropping sets for Hartford Stage’s Rear Window and Anastasia, a group of people have gathered to celebrate the engagement party of Josh and Katherine, a well-heeled couple. Her parents are in attendance, along with some of their mutual friends from college, and one of Josh’s childhood friends. The joy of the moment is quickly shattered by an accident which turn the celebration dark with lies, deceptions, and multiple twists and turns. I can’t divulge the spoilers that might ruin someone’s journey through The Engagement Party, other than to say that I was amazed at the play’s conclusion, and my #1 theatre companion and I talked about the play for a quite awhile enroute home. 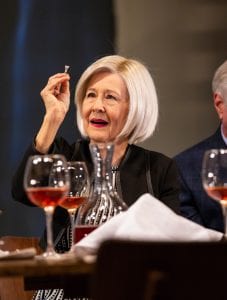 Darko Tresnjak helms The Engagement Party by balancing the comedy with the thrills. The audience never gets the opportunity to sit back and reflect as the play unfolds and unravels at a pace usually seen in a movie. Tresnjak’s creative team make The Engagement Party a feast for the eyes and ears. The ensemble is dressed in smart costumes by Joshua Pearson, lit to perfection by Matthew Richards, and surrounded by superb sound design by Jane Shaw.

Tresnjak has brought together a great cast. Zach Appleman, who gave a tour-de-force performance in the title role of Hamlet, is back as Josh, and he’s dynamic in The Engagement Party. Beth Riesgraf as his fiancee, makes her Hartford Stage debut. Excellent as her parents are veteran actors Richard Bekins and Mia Dillon,. Dillon gave a riveting performance last seaon in Seder, another joyous family gathering that goes south when family deceptions were revealed. The college friends–Anne Troup, Brian Lee Huynh, and Teddy Bergman, and Josh’s childhood friend from the old ‘hood, Brian Patrick Murphy, all shine. 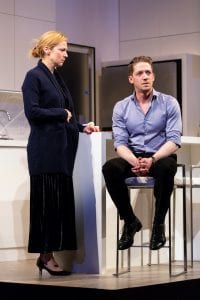 The Engagement Party is boldly original and one of the best evenings of theatre I’ve been to in a long time. Performances run through February 3.Hartford Stage has posted some cool videos about The Engagement Party, and interviews with the playwright and some of the actors on its Facebook page, and the Hartford Stage website has plenty of backgrounder information, all provided without spoilers.