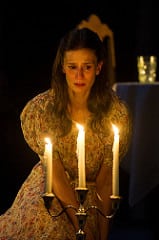 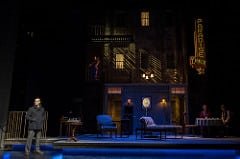 Barrington Stage Company ends its season with Tennessee Williams’ mostly autobiographical play, The Glass Menagerie, staged by Artistic Director Julianne Boyd. In this well-rendered production, The Glass Menagerie, a portrait of a family dynamic unravelling, is still emotionally so gripping and affecting.

Tom, the play’s narrator and a character based on Williams, recalls his family in Depression-era St. Louis. Tom has dreams of being a writer, as he bides his time working in a warehouse. His mother, Amanda, a faded Southern Belle abandoned by her husband,  reduced to telemarketing magazine subscriptions to feed her family, is trying to marry off Laura, Tom’s delicate sister who is painfully shy, and socially inept with guys. Tom brings home a work colleague, Jim, a potential boyfriend for Laura.

The Glass Menagerie was Williams’ breakthrough hit on Broadway, when it opened in 1944.  Heralded by critics as one of the most important  works of the 20th century, and remembered for star Laurette Taylor’s landmark performance as Amanda, The Glass Menagerie, along with Williams’ subsequent  hits, Cat on a Hot Tin Roof, A Streetcar Named Desire, and Summer and Smoke, are hallmarks of American theatre.

There have been film and TV adaptations of The Glass Menagerie, including one staged by Paul Newman with his wife Joanne Woodward playing Amanda and Berkshires actress Karen Allen as Laura. The Glass Menagerie, however, is a frequent visitor to Broadway and regional theatres. Its longevity is due to its beautiful writing, sympathetic story, and opportunities for a quartet of actors to shine. There have also been some hilarious parodies, from Christopher Durang’s For Whom The Southern Belle Tolls, performed last month at Greenfield’s Silverthorne Theatre, and The Plexiglass Menagerie, one of the landmarks of Ryan Landry and The Gold Dust Orphans in Boston.

Williams’ characters are complex, and their language rich and often poetic, wafting between dreamlike and harsh realities. Julianne Boyd’s traditional staging brings out the best of Williams’ play; her creative onstage and design team woul make Williams proud. Brian Prather’s set is a feast or the eyes, beautifully lit by Matthew Richards. Elivia Bovenzi’s costumes are magnificent, especially Amanda’s second act Southern finery. Aleander Sovronsky’s musical score, deftly played by violist Susan French, is superb. Mr. Sovoronsky, who created the music for The Cake earlier this season, is a rare find as a composer of mood music which truly enhances a production.

Angela Janas in The Glass Menagerie at Barrington Stage. Photo by Daniel Rader.

If the original Amanda, Laurette Taylor, according to theatre lore, is hard to surpass, as anyone trying to play Fanny Brice in the shadow of Barbra Streisand’s Funny Girl, Barrington Stage’s Amanda, Caitlin O’Connell gives a solid performance. This production puts Mark H. Dold’s performance as Tom front and center. An extremely versatile actor and frquent artist at Barrington Stage, who was last seen as the sinister husband in Gaslight. Dold commands the attention of the audience, whether he’s narrating his own story, participating in it, or observing from the sidelines. Angela Janas is appropriately fragile as Laura, and I liked Tyler Lansing Weeks as Laura’s “Gentleman Caller”.

The Glass Menagerie and earlier productions of West Side Story and The Cake have been highlights of my theatregoing of late. Thanks to Julianne Boyd for a magnificent season.