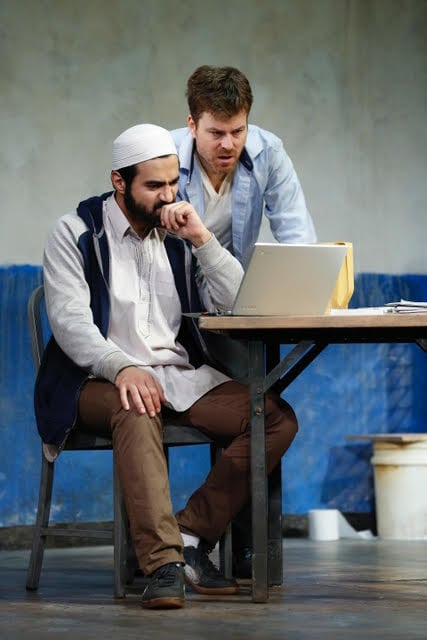 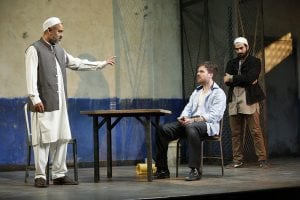 In The Invisible Hand, an edge of your seat political thriller by Ayad Akhtar, an American banker is held hostage by a Pakistani group labelled terrorists by the American government. Since ransoms aren’t forthcoming, the banker must raise his own ransom money, which the Pakistani group wants to use to build irrigation systems, food programs, and other community projects. The banker’s captors get a crash course in raising money online, and in a tense and taut two hour play, we wonder if the banker can succeed, if the captors will free him, and if they can find commonality with Anti-American, Islamaphobic and political realities in the days of Osama Bin Laden and Daniel Pearl will get in the way. Along the way, in a suspenseful tone, there’s a crash course in financial markets and trading.

Ayad Akhtar is one of the hot names on the current theatre scene. The Staten Island born, raised in Milwaukee, Brown and Columbia graduate has a solid resume in acting, filmmaking, and writing. His 2012 novel American Dervish, chronicles the life of a Pakistani-American boy coming-of-age. It’s part of a cycle Alhtar is working on, which will include a seven-work cycle on the Muslim-American experience. 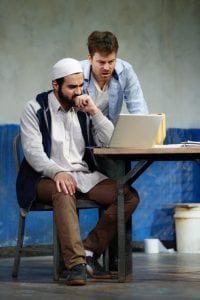 Fajer Kalso and Eric Bryant in The Invisible Hand. Photo by Carol Rosegg

Akhtar’s 2013 play, Disgraced, won The Pulitzer Prize for Drama, and since its Broadway run, has been on the roster of many American theatres. You can see it at Chester Theatre in MA on July 5-15, directed by WAM Theatre’s Kristen Van Ginhoven. His most recent play, Junk, which ran on Broadway this past season, is nominated or a Tony Award for Best Play. The Invisible Hand, originally produced at Westport County Playhouse, won the Connecticut Critics Circle Award for “Best Play”. TheaterWorks brought this production to Hartford almost intact..

David Kennedy’s staging is equally taut, navigating Akhtar’s short scenes to create a nervous tension that builds to an explosive climax. Kristen Robinson’s sets, Harry Nadal’s costumes, Matthew Richards’ lighting and Fitz Patton’s sound add appropriately to the tension. Eric Bryant as the tortured and tormented banker genius and Fajer Kaisi, as a London-raised and educated Pakistani who returns to Pakistan filled with idealism to make that world a better place, interact seamlessly, and create a tension where the anticipation of an explosive adds to the thrill. Rajesh Bose as an Iman, proves that despite idealism and “the greater good”, it ultimately is all about money.

The Invisible Hand is raw, sometimes rough, and a tense theatre experience, crafted by great writing, staging, creative elements and performances. TheaterWorks made a wise choice to showcase this powerful playwright with a sensibility that will be new to American audiences.