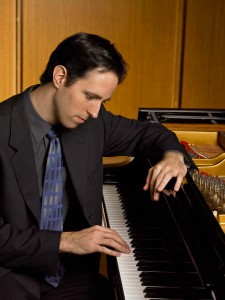 The evening was triumphant on many levels–a top of the line orchestra, a world-class conductor, and a dazzling artist brought a lot of pleasure to those in the audience. The Eine Kleine Nachtmusik showcased the SSO string section, and this masterpiece, performed for the first time by the SSO, is so exciting to hear and watch when performed live. Mozart’s  Symphony No.40 in G minor, another well-known piece of music, completed the first act of the evening. It was exquisitely performed.

Spencer Myer is an adept technician, and from where we were seated, we could notice his keyboard movements which were balletic in artistry and intensity. Maestro Rhodes brought out every nuance of the concerto, and because there is such a rapport between Rhodes, Myer, and Orchestra, their timing was impeccable.

I was sorry to see empty seats for a performance of this caliber. Some people attribute this to dwindling classical music audiences, downtown Springfield’s poorly-deserved image of being unsafe, or concerns about parking. The Symphony Hall concert-going experience was fine, with well-lit, free parking across the street under I-91. We were out of the garage within ten minutes from the final note. And, when people realize that this is an incredible orchestra with a star-quality conductor, and programs of well-known to the ear music, there should be a sold-out sign on Symphony Hall.

Maestro Rhodes and The Springfield Symphony Orchestra return to Syphony Hall on February 18, for A Life in Opera – Celebrating Leontyne Price with soprano Othalie Graham. The program includes some of Price’s famous hits from The Dance of The Seven Veils from Strauss’ Salome; Tosca’s aria “Visi d’arte” from Puccini’s Tosca and music from Barber’s Antony and Cleopatra, the opera Price starred in for the opening of the Metropolitan Opera at Lincoln Center. For details: 413-733-2291 or www.springfieldsymphony.org