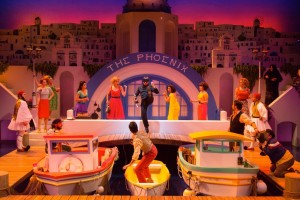 The Comedy of Errors ensemble. Photo by T. Charles Erickson.

Shakespeare’s The Comedy of Errors is one of the Bard’s most popular comedy hits. Going back to a plot familiar to the ancient Greeks and Romans, he tells the tale of two twins, accidentally separated at birth, and are reunited after mistaken identities turn comic. Rodgers and Hart turned The Comedy of Errors into the witty musical The Boys from Syracuse, and Hollywood reimagined it for comics Lily Tomlin and Bette Midler in Big Business.

Hartford Stage Artistic Director Darko Tresnjak has a way with Shakespeare, so it’s great to begin the New Year with his bright and colorful production of Shakespeare’s The Comedy of Errors. Tresnjak directs and provides the scenic designs; his frequent collaborator Peggy Hickey, whose dances were highlights of A Gentleman’s Guide to Love and Murder, Kiss Me Kate, and Anastasia, provides the choreography. 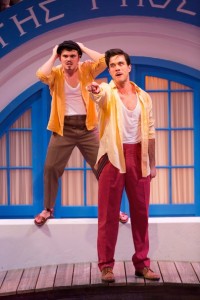 Matthew Macca and Ryan-James Hatanaka in The Comedy of Errors. Photo by T. Charles Erickson.

Tresnjak’s production is set in the mid-1960s, with hints of Never on Sunday, Zorba, Bollywood, vaudeville and slapstick. The colors are bright and sun-drenched and Tresnjak’s witty set includes a small harbor, staircases and balconies, and a variety of playing areas set against the skyline of a Mediterranean village. Fabio Toblini’s costumes are a palette of summer hues, and Matthew Richards’ lighting designs cast bold swatches of sun by day, and alluring moonlight by night. There are plenty of sight gags, humorous bits of staging and deft choreography, courtesy of Peggy Hickey.

The performances are all wonderful, and the ensemble negotiates Tresnjak’s and Hickey’s fast-paced moves as though it’s all a series of simple moves. Paula Leggett Chase as a courtesan,  Jolly Abraham as a tipsy Adriana, and Tara Heal as the kitchen maid Nell, were stand-outs for me, each triumphant in physical bits. Johanna Morrison and Noble Shropshire, recently in A Christmas Carol, were solid as an abbess and Aegeon, the merchant of Syracuse. Musicians Louis Tucci and Alexander Sovronsky added so much to the production. 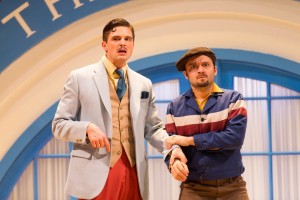 Tyler Lansing Weaks and Alan Schmuckler in The Comedy of Errors. Photo by T. Charles Erickson.

Hartford Stage’s The Comedy of Errors, clocking in at ninety minutes with no intermission, is great for first-time Shakespeare experiences. Older kids will love the energy, the slapstick, the sight gags, and the rich language. So will the theatre veterans. This production, which runs through February 12, is just plain fun.