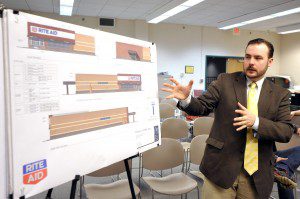 Christopher M. Tymula, civil engineer for MHF Design Consultants of Salem, New Hampshire, explains the logistical layout for a new Rite-Aid Pharmacy to members of the Southwick Planning Board last night. Members expressed their displease with the present design which would be located at 592 College Highway. (Photo by chief photographer Frederick Gore)

SOUTHWICK – The Planning Board met with architects and attorneys for Rite-Aid last night.
The company is planning to build an 11,944 square-foot store and pharmacy at 592 College Highway in the building previously occupied by ABC Pizza.
Christopher M. Tymula, an engineer with MHF Design Consultants of New Hampshire, presented drawings of the proposed building, which featured a drive-thru on the north side and main entrance to the south. Board members expressed their distate for the building’s aesthetics.
“That doesn’t look like that nice of a building,” said board member Terrence Welch. “I think we can do much better.”
Vice Chairman Roz Terry agreed and said when turning left onto College Highway from Feeding Hills Road, the drive-thru side of the building is the first thing you see.
“I don’t know why you’d want to see that side,” she said.
Member Robert Johnson also agreed but said he didn’t want to be completely negative, adding that “I very much support the project.”
The entire board said it supported the project but wanted to see other options for the building.
Plans include a connecting driveway to the adjacent ExxonMobil station. Two variances were already granted from the Zoming Board of Appeals for setbacks.
“There is no wetland impact, just a buffer,” said Tymula.
Cars would enter the lot through existing curb cuts. The plan presented last night would have drive-thru pharmacy vehicles enter and turn right, then turn completely behind the building to enter the drive-thru on the left side of the building. Board members wondered if a drive-thru on the opposite side made more sense.
Tymula said other options could be presented.
“I’m looking forward to it,” said Welch.