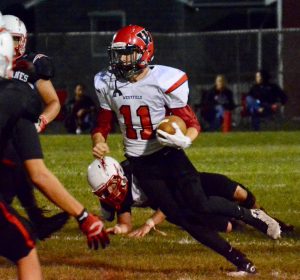 ADAMS – Hoosac Valley compiled one rushing touchdown in each of the first two quarters, and threw for two more in the third quarter en route to a 26-0 shutout of visiting Westfield in Friday night football at Renfrew Park.
Hoosac went up 6-0 late in the first quarter, and made it 12-0 with 6:13 remaining in the half on a second TD jaunt. The Hurricanes took a swing pass nearly 60 yards for a touchdown with 5:10 left in the third quarter.
Westfield’s lone offensive highlight was a beautiful deep pass from junior quarterback Mike Nihill to wide out Kalen White that White caught in stride and took deep into Hoosac territory.
Early in the fourth quarter, injury struck when Nihill suffered a game-ending injury and was taken by ambulance to a local hospital.
After play resumed, Westfield had a first-and-goal from the Hoosac Valley 5-yard line, but the Hurricanes put forth a solid goal line stand, stopping the Bombers at the 3.
Westfield (0-2), which also suffered a season-opening loss at D2 state champion Falmouth attempts to right the ship at Agawam Fri., Sept. 29. The Bombers return to Bullens Field for their home opener against Chicopee Comp Fri., Oct. 6.

GYMNASTICS
Westfield places first vs. Agawam, Chicopee Comp
Westfield piled up 132.40 points, good for first to extend their decade-long win streak in a season opener on the road.
Madi Somppi finished first on the balance beam (8.7) and floor exercise (8.775), Kylie Liptak captured gold on the bars (8.85), and Mairead Hagan was second all-around with a 32.75.
Liptak was also third all-around with a 32.525.

BOYS’ SOCCER
Bombers win thriller
Westfield 1, East Longmeadow 0
Kyle Roberts scored on an assist from R.J. Piper four minutes into the second half for the game-winner at home. Piper crossed it in and Roberts vollied it in from about the top of the 18.
“I thought we got a really good performance from our back four today,” Westfield coach Andrew Joseph said. “They ‘re tough and physical and they tackled hard, and help us set the tone. … Everybody took it up several notches. It just clicked for us today.”