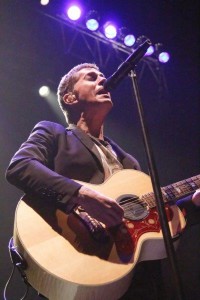 UNCASVILLE – Rob Thomas opened his show at Mohegan Sun on Friday night telling the audience to sit back and relax because he was going to be up there for the next two hours. Well, two hours it was and when it was the over, he could have done another hour and that would have been just fine with the fans in attendance.
The stage set up was completely barebones, consisting of a couple of chairs for two guitarists and a grand piano, but that kind of summed up what the night was all about: music. It was an acoustic evening with plenty of stories mixed in with some impersonations and some occasional jokes. And no, I am not talking about a comedian… this was the lead singer of Matchbox Twenty and musical superstar Rob Thomas performing.
Thomas opened the show with five straight songs from his solo career including Mockingbird, Fallin’to Pieces, Sunday Morning New York Blue, Her Diamonds, and Getting Late (which included a rendition of Elvis’s That’s Alright Mama. Each song brought with it its own little story that Thomas shared throughout the night.
Thomas talked about his time writing songs with Mick Jagger and then proceeded to do, in his words a “spot on” imitation of the Rolling Stones legend. This brought a roar of laughter from the crowd as he then played the song they co-wrote, Disease.
The set was filled with both Thomas solo and Matchbox Twenty material that included, Lonely No More, 3 A.M.(a song about his mom’s battle with cancer), Someday, Bent and I Think We Feel Good Together. Some other highlights included a take on the 1980’s Howard Jones song, No One is To Blame. During his hit, This is How a Heart Breaks, Thomas added a verse of the Tommy Tutone hit, 867-5309, Jenny.
Towards the end of the evening, Thomas poked a little fun at full-blown concert production and told the audience, “the encore starts now, so I am going to save you the five minutes of waiting for me to come back out and just do another song. So when I finish the next couple of songs, I am leaving”. This was great to hear as the whole encore thing has really run its course.
The second to last song was one that Thomas recorded with Santana, Smooth. Here again, Thomas showed his comedic side by doing another impression of Santana that included a story of the very first time they met with Santana wearing a banana yellow suit and hat. Needless to say the story had the crowd laughing and wanting more.
Thomas ended the set with a Matchbox tune, Bright Lights. This was a fitting end to a evening of well-written songs, excellent musicianship and a bond that Rob Thomas formed with the audience by sharing some many stories from his life.
Rob Thomas is one of this era’s great songwriters and he is worth going to see more than one time. If you are a fan of him or Matchbox Twenty’s music and you haven’t seen them live before, then you are truly missing out. Each time I have seen a performance, solo or band, it is some of the best sounding live music I have heard from any performer. Now do yourself a favor and go check them out!