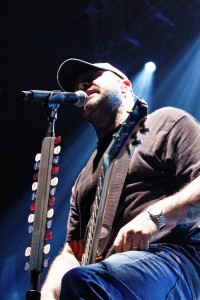 UNCASVILLE – Local boys Staind, in the middle of a summer tour, brought their hard Rawk show to Mohegan Sun on Thursday night. The band is back together after a brief hiatus that led to the departure of long time drummer, Jon Wysocki. During this time singer Aaron Lewis released a country record and toured endlessly in support of it. Now back together, Staind has hit the road for a full blown tour and also headlining some large summer concert festivals throughout the United States.
Kicking off the show with Eyes Wide Open, Staind came ready to Rawk. Lead guitarist Mike Mushok, was uncontrollable as he bounded around the stage with endless energy. Falling came next and was followed by Right Here, the band has not lost a step during the lengthy layoff. Singer Aaron Lewis, fighting a cold which almost led to the show being canceled, still sounded amazing.
The band played a number of songs throughout the night off their most recent album release. The self-titled album released in 2011 has that heavier edge reminiscent of some of the band’s earlier releases, but still showed the melodic side that the band has been known for. Staind moved right in to their hit song So Far Away, while getting the audience involved in a sing-along for the chorus. Going back to a heavier tone and adding in some growling vocals, the band ripped through the song Spleen and provided some great energy throughout the arena.
The set slowed down a bit as singer Lewis took the stage solo for a great acoustic rendition of his song, Home. Home (also released as Country Boy on Lewis’s country release, Town Line), pays homage to Lewis’ ideals and love for his home state of Massachusetts. Lewis is a phenomenal songwriter and extremely versatile writing slow acoustic songs, extreme Rawk songs and everything in between.
Lewis threw in a few digs about a former bandmate, while introducing the songs Not Again and Paper Wings, adding the comment “I wrote this about a drummer”.
During a break between songs, Lewis mentioned that he has brought back his charity event to Look Park in Northampton and will be doing an acoustic set with the entire band. The charity is called It Takes a Community, look it up as it is for a great cause and a great opportunity to see the band in a stripped down setting.
After a quick break, Staind came roaring back for the start of a three song encore with their classic, Mudshovel. A pounding song that showcased the thunder of drummer Sal Giancarelli and bassist Johnny April, this is Staind at their best. The band closed the night with their hit song, It’s Been Awhile, which again had the audience singing along in karaoke mode and For You.
Staind is back! Even with Lewis nursing a bad cold, both he and the band sound great. Although, due to his condition, the set was cut short (running about 75 minutes) as some of the songs that were played on previous nights, were eliminated. Personally, I am looking forward to the band putting out some new music and putting together another tour. I am also looking forward to hearing more from Lewis on his country career as clearly he can do both styles of music extremely well.