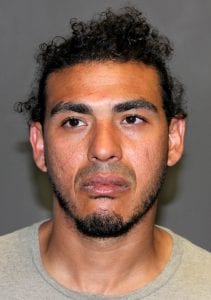 WESTFIELD – A city man who allegedly robbed a Russell Road convenience store Friday evening was in police custody 15 minutes after he fled with the cash he stole from the frightened clerk.
City police report that a clerk from Honeyland Farms convenience store at 4 Russell Road called police at 8:31 p.m. Friday to report that a Hispanic man wearing a hooded sweatshirt tied tightly around his head and pointing something at her that he was holding in the pocket of his sweatshirt had robbed the store moments earlier.
Officer Joshua Krassler, the first officer to arrive at the crime scene, reports in a court document that the clerk did not immediately give the robber the money when he said “Give me the money, I don’t want to hurt you” but, when the man started to come around the counter towards her, she feared for her safety and surrendered about $600.
The clerk said the man fled to a white van and drove away on Highland View Street.
While an officer was speaking with the clerk, another officer spoke with a caller who reported that he had seen a man he recognized run from the store to a white van which had been parked on Highland View Street and drive it away. The witness was able to tell police where the man might be found.
At 8:33 p.m. officer Allen Magdycz reported that he had found the suspect van at 24 E. Silver St. and, at 8:46 p.m., office Bradley White reported that two men, one of whom fit the description of the robbery suspect, had been detained nearby.
That man, subsequently identified as Benjamin Sanchez Jr., 31, of 24 E. Silver St., was identified as the robber by two witnesses and was arrested for armed and masked robbery. He was found to be the subject of three outstanding warrants issued in 2019 by the Westfield and Holyoke district courts and also arrested on those warrants.
Krassler reports that the man found with Sanchez, identified as Martin A. Valentin, 54, of 12 Alice Burke Way, Apt. 312, “stated spontaneously that he was in possession of a nickel bag of cocaine” and he was arrested for possession of a Class B drug. Arraigned on Monday before Judge Laurie MacLeod, Valentin was released on his personal recognizance pending an Aug. 23 hearing.
Sanchez was also arraigned before MacLeod but Assistant District Attorney Clarissa Wright filed a motion asking that he be held without right to bail due to his dangerousness. In her motion, Wright cited Sanchez’s record which includes charges of defrauding, uttering a false check, receiving stolen property, operating a motor vehicle under the influence of alcohol, resisting arrest and possession of both Class E and Class B substances.
MacLeod allowed the motion and Sanchez was held pending a dangerousness hearing on Tuesday. At that hearing, Judge Paul Vrabel ordered Sanchez to be held without right to bail for 120 days.