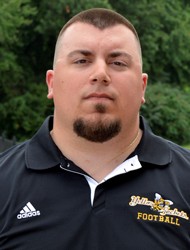 WESTFIELD – A new era of Bombers football has dawned.
Westfield High School has hired its new head football coach, Rocco Fernandez, the school’s athletic director Karen Gomez announced Thursday.
Fernandez, 28, is a graduate of Westfield High (2004) and Iona College (2008), who played Division I football and coached at three different levels of college football.
“We are finally excited to have a coach for our program,” Gomez said. “We are excited to see the new direction this coach will take us. Football is the face of Westfield High.”
For the last decade, Westfield fell under the tutelage of coach Bill Moore. Moore directed the Bombers to two Super Bowl appearances, a west sectional final (under the state’s new tournament last season), furthered the careers of several student-athletes at the next level, and hosted a NFL-sponsored camp in the offseason.
The latest hiring is the ultimate handoff from one true professional to the next.
“It’s a dream come true for me to get this this job – pursuing my dream of coaching and finally achieving that at Westfield High School,” Fernandez said. ‘I’m hoping to keep the winning tradition intact. Coach Moore has big shoes to fill.
Fernandez has already had a hulking presence as a Bomber, being a three-year starting lineman and senior team captain playing for the team. He served as a volunteer-coach for Westfield High football in 2007, was the offensive line/tight ends assistant coach at Westfield State University (2009-10) and Post University in Waterbury, Conn. (’11), before taking over as the assistant coach for running backs at American International College (2012).
Fernandez was one of three candidates interviewed for the head coaching position.
“We had a good pool of candidates,” Gomez said. “All three were quality players or coaches.”
The interview committee, a 5-member board, selected Fernandez, and met final approval from Superintendent of Schools Dr. Suzanne Scallion.
What likely set Fernandez apart from the other two candidates – aside from his community roots – is his coaching philosophy.
Fernandez is scrapping the triple option offense, in favor of the pistol offense and read option, which swept all throughout the college and pro ranks the past few years.
This style of offense theoretically opens up more options for the offense, making for a more effective running game, and allowing dual-threat quarterbacks, who can run and throw, to flourish. One name who comes to mind in the pro game that employs this type of offense: San Francisco 49ers QB Colin Kaepernick.
Another early success story at the pro level is Philadelphia Eagles head coach Chip Kelly, who brought his version of the read option to the NFL from Oregon University.
“Hopefully now we will be able to keep up with this modern offense that colleges are using,” Fernandez said. “Our players will be better acclimated to that style of offense.”
The only drawback to this style of offense, critics say, is that quarterbacks are more susceptible to dangerous hits. In this day and age of concussion-awareness that may be cause for concern, but even in the triple-option attack (which is being phased out) a few Bombers’ field generals have taken a licking from time to time.
While Fernandez knows quite well that crushing blows and violence are part of football, the Bombers new head coach noted the positive impact the game has on players.
“The team aspect is huge – the camaraderie you get (from playing football),” Fernandez said. “I still have a lot of friends that I played football with in high school and college … and the skills that you learn on the football field translate later on in life in what you do for work.”
Fernandez, who works in sales off the gridiron, has ensured school administrators that we will dedicate himself to the players, the team, the program, the school – and even to Westfield Youth Football.
Fernandez said he plans to meet with Westfield Youth Football League president Bob St. Pierre to begin implementing many of the same offensive and defensive schemes at the youth level that the high school team will employ this fall. That, in theory, should help lessen the learning curve for young athletes wishing to play at an older age.
“(Rocco) has a long road ahead of him,” St. Pierre said, “but this is going to be a breath of fresh air in that it’s not the same offense and defense. He should breathe a little more life into the high school program, hopefully.”
Westfield High School principal Jonathan Carter agreed.
“We chose Rocco Fernandez because we think he’s the right person to continue taking a good program and making it even better in the future,” Carter said. “I want to thank coach Moore for taking the program to where it is today, and wish him good luck in the future.”
According to Carter, Moore will remain at Westfield High on the academic side of things as a social studies teacher, a position he has been entrenched in for several years.
While Carter tipped his cap to Moore’s coaching acumen, he also had much to say regarding the program’s new head coach.
“(Rocco) has the right mentality, the right commitment, and belief system to continue not only putting out good results on Friday nights,” Carter said, “but also working to develop the confidence and character of the young men who participate on our football team.”
“I look forward to many, many years ahead working together with him,” he added. “I am excited what this means for the Westfield community.”
While Fernandez is unlikely to unveil his true game plan to the public prior to game day, he already has one play drawn up that fans are sure to enjoy.
Said Fernandez: “I want to keep us in the playoffs, knock off Central, and take back the Western Mass. crown.”
That should be music – or rather, the sounds of bone-crunching hits and raucous good-spirited fun – to the ears of everyone in the Whip City.