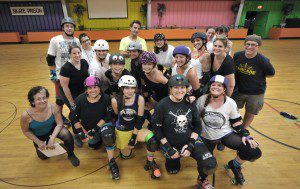 Electrifying female roller derby skaters, rip-roaring metal and rock music, with loud, live play-by-play is rolling into the Whip City.
On Saturday, Amelia Park Ice Arena will host its first roller derby competition featuring Wilbraham-based Pair O’ Dice City Rollers against Worcester Roller Hockey. The punk era with tatted-up chicks, funky hair-dos, and fluorescent garb fighting for victory will be on full display in the park’s outdoor arena when the first whistle blows at 6 p.m.
“It’s impossible to follow, a thrill a minute, and people shove each other – what’s not to love?” said Pair O’ Dice City’s eldest skater, 68-year-old Merri Ansara, who in the roller derby circuit is known simply as “Auntie M.”
“Auntie M” an Easthampton native, is still training to become game-eligible. She, and other current members, must rise up the ranks before actively competing.
“You have to have strategy, you have to be flexible with your teammates, you need to communicate with each other and look over your shoulder,” Ansara said. “It’s just totally gripping.”
On the flat-deck floor, they are one strong unit, hip-checking and booty blocking their opponents. They are known by their derby names such as “Pandora’s Squeezebox,” “Ballistic Miss L,” Neon Stiletto,” Olive R Twisted,” and “Halle Pain Yo.”
Five at a time they will attempt to propel their “jammer,” typically one of the team’s quickest or most agile players, through a wall of opponents first to score points.
Behind the mask of their sport though, Pair O’ Dice City are teachers, librarians, a psychotherapist, and a budding 19-year-old prodigy.
Pair O’Dice City, whose average player’s age is 32, consists of female roller derby skaters from Northampton, Westhampton, Wilbraham, Springfield, Monson, Chicopee, Bondsville, and North Adams.
While each athlete gains something different from the sport, whether it is to fulfill that competitive drive, to stay in shape, or serve as a stress reliever, there is a much greater  purpose at work, according to one of the team’s leaders.
“Roller Derby lends itself to a sense of community,” said Rose Johnson, AKA “Bootsy Killins.” “It’s member-driven, we’re all part-owners, and our organization gives back to the community.”
The proceeds from Saturday’s event will benefit the Boys and Girls’ Club of Greater Westfield in memory of Patti Andras.
Thus far this season, Pair O’ Dice City, is 0-3, having lost bouts at Maine, Long Island, and Vermont.
Johnson said the crowd in Maine had by far the most incredible group of fans cheering for both teams, and even treating the Western Mass. players like well-known sports stars the following day.
Members of Pair O’ Dice expressed hopes that Amelia Park’s outdoor arena is packed with hundreds of screaming fans Saturday night, especially considering that funds raised from the event will go toward a good cause.
There will be a dice toss, raffles, a DJ spinning tunes, and a special halftime show featuring America’s Got Talent participant Justin Bradley performing on keyboard. Gates open at 5 p.m., and tailgating is allowed leading up to the big event.
Tickets are on sale $8 in advance and $10 at the door. Children under age eight are free.