WESTFIELD – The Finance sub-committee met for the fourth time on Monday to vote on which redistricting option the School Committee would take next year. Mayor Brian P. Sullivan opened the meeting reporting on recent negotiations with the town of Russell, who he thanked for being willing to come down on the lease from $250,000 to $100,000 for the remaining year in the contract. 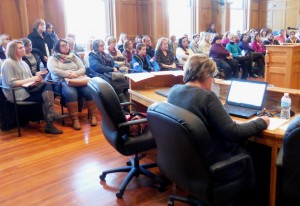 Mayor Sullivan said the School Committee had to make a decision before the April 1 date of the lease to take the remaining two 6-month options at the lowered cost.
Finance sub-committee member Ramon Diaz, Jr. told the packed audience in the City Council chambers that he got a lot of constructive feedback from the community. “I respect and appreciate your opinions when we receive them. I really appreciate your point of view, teachers and parents alike,” Diaz said.
Diaz then made a motion to vote on Option 1 for 2017-2018, to keep Russell school open for one year only.
During the discussion, Finance sub-committee member Cynthia Sullivan said when the process started, she had been convinced to move students back from Russell. She said she still is of that opinion, but having heard from so many constituents, she will support the vote.
Diaz said the Russell numbers speak for themselves, and he would support the vote.
Kevin Sullivan, the chair and third member of the Finance sub-committee, said this is the first time they had held four consecutive meetings with so much public participation.
“We started this process because of the school budget,” Kevin Sullivan said, adding that the lowered lease does not solve all the problems. “The one year measure is in the best interest of the kids,” he said.
Mayor Sullivan said he appreciated Cynthia Sullivan changing her stance on this, because of what Juniper Park parents have been through. He called the one year a band aid that would be pulled off the following year.
“It gives us all a breather to catch our breath, and gives the teachers and kids at Russell the year they thought they were going to get,” the mayor added.
The motion then passed 3-0. Kevin Sullivan said it would go for a vote to the full School Committee, all of whom were in attendance, later in the evening. “Now the question becomes what do we do for 2018-2019,” he added.
Cynthia Sullivan said she has talked to a lot of stakeholders, including parents, teachers and administrators running middle schools. “My opinion is that the 5/6 (intermediate school) and 7/8 (middle school) option is better for the kids, better for curriculum,” she said.
Sullivan said that the other option of two 5-8 middle schools would cause a lot of angst for parents for a lot of reasons.
“I would like to know what that option would be definitely by the beginning of 2017, so we could involve all the teachers. I want to see progress,” she added.
Kevin Sullivan said that the main reason for the vote was to take more time to look at both of those options more closely, acknowledging that the School Committee is still in the budget process for next year. The full budget for 2017-2018 will be rolled out at the next meeting on March 28.
A discussion followed on how much time it would take to put together a detailed study on the two options and their impact and costs. Diaz clarified for Superintendent Stefan Czaporowski that they were looking for the structure, not which streets will go to which schools.
“I think that could be done by the end of the school year. I thought you wanted the whole plan,” Czaporowski said, breathing a sigh of relief.
School Committee member William Duval asked for research from other communities on which configurations work, and what doesn’t work.
“Everything that we’ve already looked at shows what goes on inside the school is more important than the grade configuration,” Czaporowski replied.
Kevin Sullivan then chose the date of June 19 and a motion was made for a Finance sub-committee vote on that date on which option to move forward for 2018-2019. The motion passed 3-0.
Later in the School Committee meeting both motions were presented.
During the discussion, Kevin Sullivan said that the committee had reached a consensus on how to keep things moving forward, adding that the town of Russell had been very helpful in reducing the rent for the school to 40% of what Westfield is currently paying.
Diaz said that even with Russell’s willingness, the School Committee still has a big hurdle to overcome with the upcoming budget.
Cynthia Sullivan said that anything that the committee decides to do, does not solve the need for Abner Gibbs and Franklin Avenue schools to close and to build a new school. “That has not changed,” she said.
School Committee member Diane Mayhew commended the Finance sub-committee for doing a great job, and for keeping the process open.
The roll call votes to keep Russell open for one year and to make a decision on June 19 for 2018-2019 both passed 7-0.