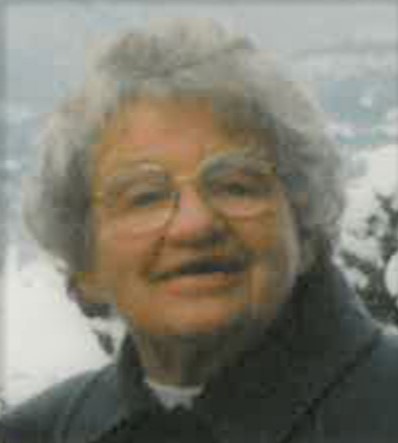 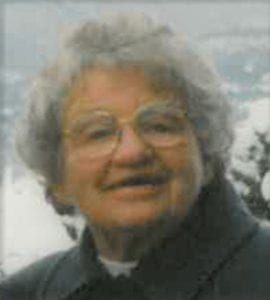 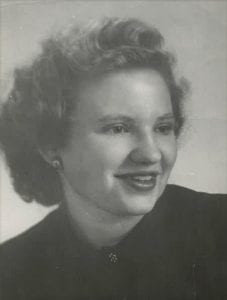 WESTFIELD – Ruth E. (Preble) Finney died November 11, 2019 at the age of 92. She was born January 19, 1927 in Hartford CT., the daughter of Howard W. Preble and Marion J. (Felch) Preble. Ruth attended grammar school in Norwalk, CT. When she was 13 the family moved to Waterville, Maine where she graduated from high school in 1944. Ruth graduated Phi Beta Kappa with a B.A. in English from the University of Maine Orono in 1948. In her senior year she met Robert (Bob) Finney at a college dance, and they married after her graduation. She began teaching junior high and high school English, while Bob, a WWII veteran, completed his B.S. in Mechanical Engineering at UMaine preparing him for his life’s work in the paper industry. In 1967 the family moved to Westfield,  where Bob worked at Strathmore Paper Co. Ruth worked at Steiger’s Department Stores for more than twenty years, and their four children completed their high school educations in preparation for college. Besides diligently raising a family, Ruth was active in the life of her church, Westfield’s First Congregational: singing in the choir, serving as a Deaconess, leading Bible study, teaching Sunday school, serving on the World Service Committee (missions), and actively caring about her fellow parishioners. In the community she was a peace activist and a volunteer ESL teacher. When she and Bob could get away for vacation, they headed to their favorite state of Maine. They also enjoyed decades of sharing their backyard pool with beloved family, neighbors and friends. They participated together in years of ballroom dancing, Elder Hostels (now called Road Scholars), playing bridge and travelling in the U.S. and Europe.

Ruth is pre-deceased by her husband, Robert, in 2014. She is survived by her four children, Patricia Finney, Carol Gabranski, Deborah Finney and Paul Finney; her four grandchildren, Trevor and Rachel Finney, Emily and Peter Gabranski; two sisters, Carolyn Olmstead and Barbara Norton; sister-in-law Beverly Aker; ten nieces and nephews. Waking hours will be at Firtion Adams Funeral Home, 76 Broad St. Westfield on Friday, November 15th from 4-6 p.m. A Christian memorial service will be held at the First Congregational Church, 18 Broad St. Westfield, MA on Saturday, November 16th at 11 a.m., with a luncheon to follow. Ruth will be buried with her Robert at Woodlawn Cemetery in Westbrook, Maine. Donations honoring Ruth may be made to the First Congregational Church, Music Programs, 18 Broad St. Westfield, MA 01085 or to Heifer International, 1 World Ave. Little Rock, AR, 72202. www.firtionadams.com