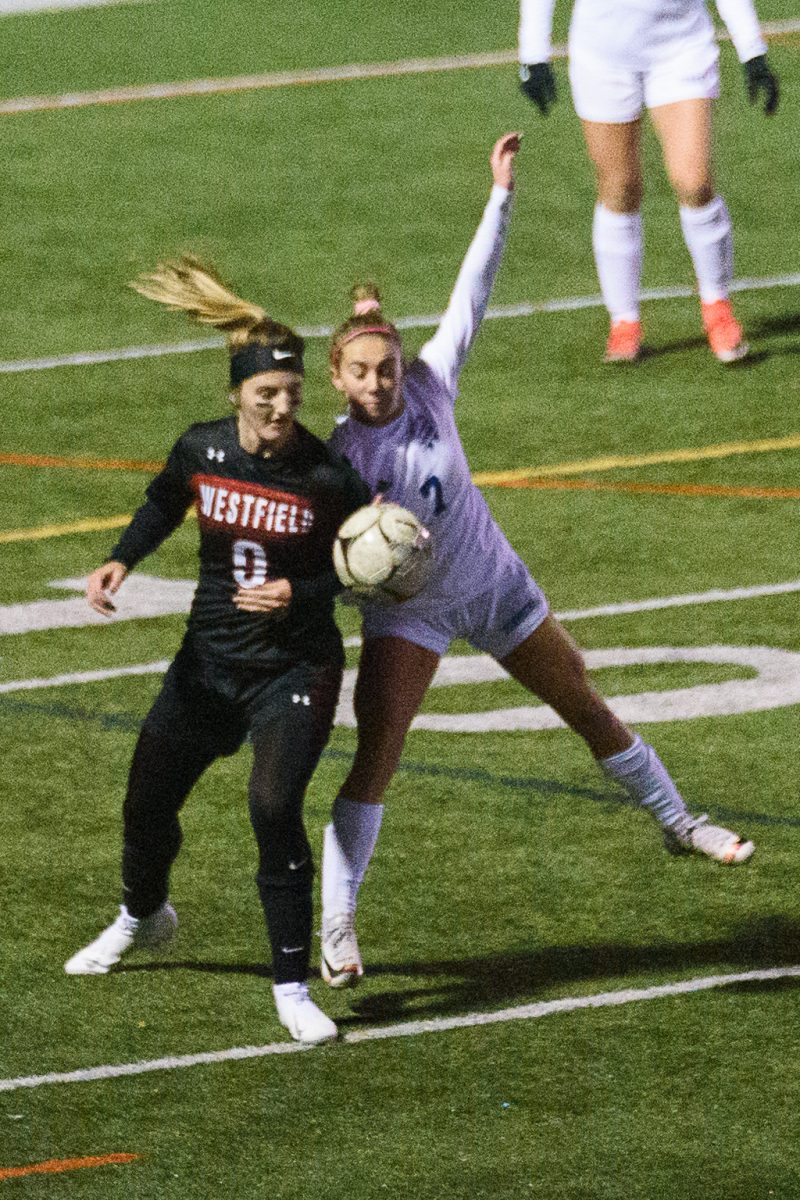 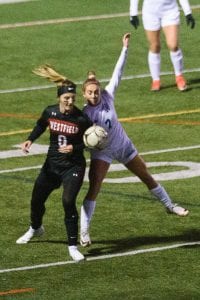 SPRINGFIELD – The Westfield High School girls soccer team may not have beaten Mother Nature on Tuesday evening, but they finally beat Father Time.
After several suffering years, No. 2 Westfield finally found a way to defeat the three-time defending Western Massachusetts Division 1 champion, freezing out third-seeded West Springfield in the semifinals 4-1 on a bitterly cold Tuesday night at Central High School’s Berte Field.
“We knew what we were coming up against – a long history of West Side to overcome,” Westfield girls soccer head coach Keith Saltmarsh said. “Their coaching staff, their players are really a tough team to play against, but we put it together.”
Hungry for their first taste of the finals in more than a decade, Westfield (15-2-2) came out and attacked the West Springfield net with unparalleled ferocity.
Less than two minutes in, Westfield junior forward Chandler Pedolzky attempted a shot. Two minutes later, the Bombers earned a corner kick. They made another strong offensive push two minutes after that. West Springfield’s defense thwarted all three attempts.
In the 10th minute, junior forward Catie Bean launched a shot from 20 yards out that sailed high. Bean attempted another shot two minutes later that failed to find the back of the net.
West Springfield’s first shot on net came in the 13th minute, a weak attempt that Westfield goalie Adrianna Arona (5 saves) easily corraled. The Terriers’ second shot was much stronger as senior Makenzie Paulo lofted a lengthy floater toward the Bombers’ net on a direct kick. Arona plucked the ball out of the air.
Twice more over the next five minutes, Paulo launched perfect direct kicks. Both times, Westfield’s defense prevailed.
Then, with 10:09 remaining in the first half, Bean broke the ice with a goal. The junior forward worked hard to create her own shot, taking a pass from senior Lauren Bolduc, dribbling toward the net in a blur and scoring the team’s first goal.
“We went into it like really hard and we wanted it,” Bean said. “I’m a fast player so speed helped a lot with that. When I realized that we can use our speed to our advantage, it helped a lot.”
After 30 minutes, Westfield had forged a lead. It took West Springfield (13-3-4) just 30 seconds to knot the game at 1-all when another long direct kick from Paulo deflected off a Bomber into the back of the net.
“They’re dangerous on set plays,” coach Saltmarsh said. “We knew that.”
A tie was nothing new for the two teams. Twice during the regular season, Westfield and West Springfield finished deadlocked with final scores of 1-1 and 0-0. That would not be the case the third time around.
Late in the first half, with three defenders draped around her just outside the box, Pedolzky booted a rocket past West Springfield goalie Emily Letendre (5 saves). Westfield led 2-1 with 2:33 left in the half.
Pedolzky and the Bombers were not done.
Midway through the second half, Pedolzky took a pass from junior Autumn Waitt and found herself on a semi-breakaway. Pedolzky slowed up deep in the box to take on a final West Springfield defender and the goalie looming in net. Two West Springfield defenders trailing the play caught up to the ball, but Pedolzky outworked all three, dribbling around all of them and drilling a shot into the opposite side of the net with 22:24 remaining for a commanding 3-1 lead.
Westfield senior Kaela Mochak tacked on an insurance goal a short time after. Pedolzky took the initial shot. The ball bounded back out to Mochak, who hammered it home.
“We’ve been practicing for the last two weeks since we’ve had a bye,” Pedolzky said. “Just to keep fighting, keep pushing, play our game. We focus a lot on possession so that’s what we were trying to do. … We really wanted it and I think that’s what separated us from them today.”
Said coach Saltmarsh: “They all stepped up big time tonight.”