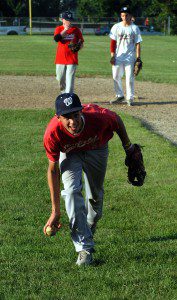 WESTFIELD – The Westfield Babe Ruth Baseball 15-Year-Old All-Stars suffered a 19-2 loss to host North Adams in the opening round game of the state tournament, and trailed 5-1 against Worcester in the bottom of the seventh inning on Saturday.
The Whip City bunch could have packed it in, called it a tournament, and left the legwork to the city’s 13- and 14-year-old All-Star teams. But this group of 15-year-old players proved resilient, rallying for five runs in the bottom of the seventh Saturday for a 6-5 victory. Christian Hoiberg hit a bases-loaded triple, and scored on an errant throw to the plate to tie the game. Mike Diamond doubled and Drew Carson hit the game-winning single to turn the tides.
On Tuesday evening, Westfield’s 15’s will get another crack at host North Adams, in a semifinal game beginning at 7 p.m.
“We didn’t play our game (that first time),” Westfield 15-Year-Old All-Stars manager Ted Burns said. “We were out of position, making errors, and we didn’t hit the ball. But we have the potential to hit, and that (game against Worcester) was an unbelievable win. Hopefully we can carry over that momentum.”
In other words, don’t count them out!