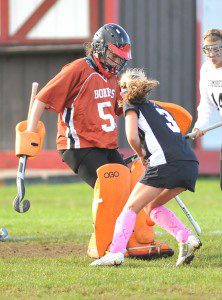 Westfield keeper Jess Hale, left, makes the save against Longmeadow forward Jessie Moriarty during the first half of yesterday’s game at Westfield High School. (Photo by chief photographer Frederick Gore)

WESTFIELD – There was a bit of drama in the Whip City on Friday.
Monica Peterson came out of a scramble out in front of Westfield Voc-Tech’s net and scored the game-winner in the 51st minute as the Saints held on to beat the Tigers, 1-0 Friday at Jachym Field.
St. Mary’s goalie Darby Bailey had three saves in net. Megan Illnicky made seven for Voc-Tech in a well-played game.
Katie Nesmelova helped anchor a solid Tigers’ defense.

FIELD HOCKEY
Longmeadow 2, Westfield 0
Karly Mastello made seven saves in net for Westfield, which lost to area heavyweight, Longmeadow.
“It was a great opportunity to get us ready for tournament,” Westfield coach Karen Gomez said. “We’ll learn from our mistakes and we’ll move forward.”

TIGERS NET BERTH: The Westfield Voc-Tech boys’ soccer team earned a berth in the Western Massachusetts Division III tournament with a win over St. Mary’s at Westfield North Middle School late Friday. The Tigers, who needed to win at least half of their 17-game schedule or finish first or second in their league, now have a record of 9-3. No further details were available as of press time.