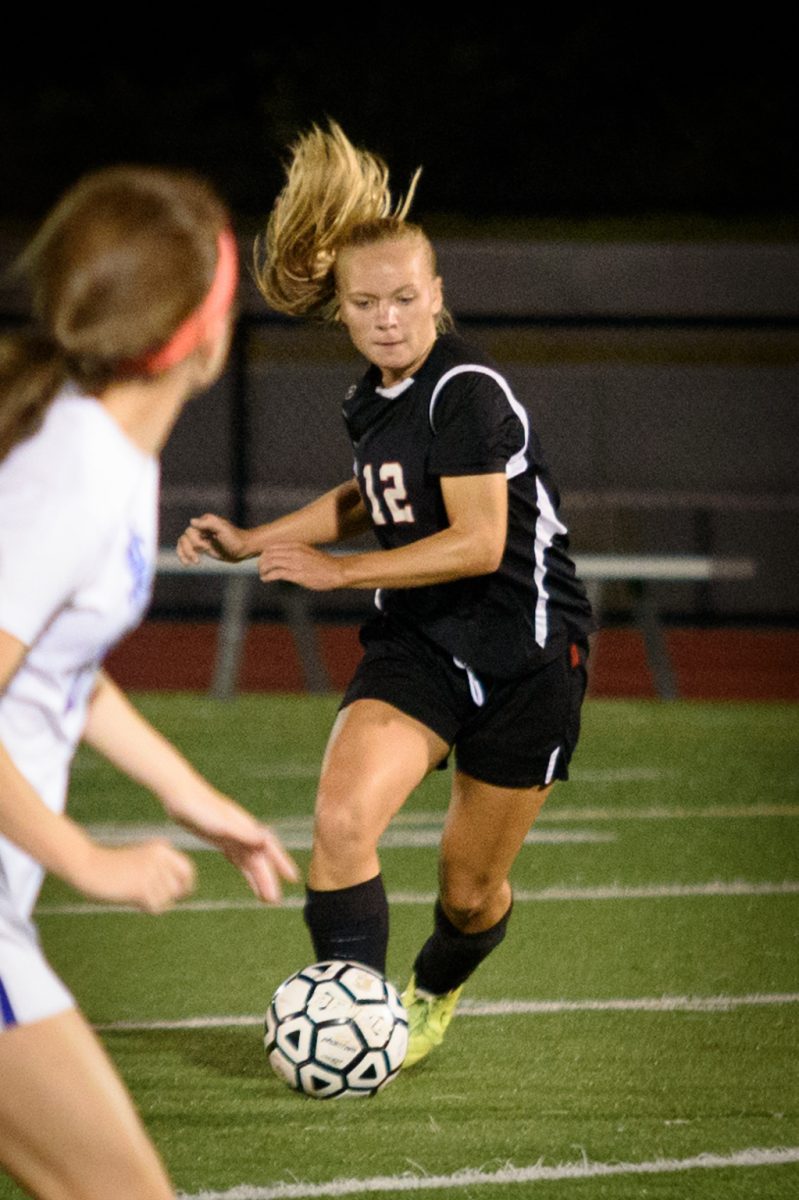 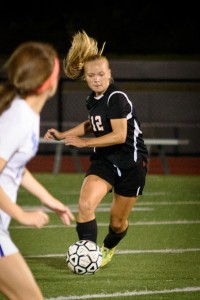 Westfield’s Lindsey Kiltonic is determined to get past the West Side defender Tuesday night at Clark Field. (Photo by Marc St. Onge)

WESTFIELD – St. Mary rallied from a three-goal deficit with three unanswered goals in the final 30 minutes to force a 3-3 tie against Putnam in a high school boys’ soccer game Tuesday at Westfield Middle School North.
Padraig Horag-Smith started the rally with a goal on a penalty kick.
“He got us on the board and kind of got the momentum going,” St. Mary coach Billy Lamirande said.
Jack Lamirande scored the next two goals for St. Mary, both assisted by Matt Masciadrelli.
“It’s one of those good ties when you’re down 3-0 nothing,” coach Lamirande said. “It just took a little spark from a penalty kick that got the team to wake up.”
St. Mary put the pressure on in the second half, and nearly won it – several shots hit the post.
Jacob Butler preserved the tie with 21 saves, including several key ones down the stretch.

GIRLS’ SOCCER
Gateway 3, Mahar 0
Jessica Van Heynigen scored all three goals for a hat trick, and Gateway cruised on the road. Sam Belardo had two assists, and Becca Hyjek had one.
Gateway goalie Becca Herman (1 save) earned a shutout.
The Gators improved to 5-2-1.

GOLF
Hogan medals in WHS win
Westfield 165, Ludlow 173
Jack Hogan shot a match-low, 3-over 38, his fourth straight round in the 30s, to lead Westfield. Bombers’ Liam Whitman and Adam Blair each finished with a 42, and William Webster shot a 43.
Westfield improved to 7-2 overall, 6-1 league.

Rams ground Eagles
Southwick 23, Easthampton 1
Southwick improved to 8-1 overall, 6-0 with a dominating victory at Pine Grove Golf Course.
James Longhi led the way, shooting a 1-under 35. Bradley Durand and Jagger Turgeon each shot a 41, Chris Molta had a 43, and seventh grader Matthew Garrity finished with a 44. 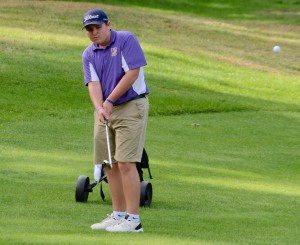 Westfield Tech’s No. 1 golfer Matthew Puffer follows through on a swing of the club. (Photo by Chris Putz)

Panthers top Tigers
Palmer 23.5, Westfield Technical Academy 0.5
Matthew Bachand (40), Emma McCloskey (42), and Tim Canning (48) each shot a round of golf in the 40s to upend visiting Westfield Tech at Quaboag Country Club in Monson. Matt Puffer led the Tigers with a 48.

FIELD HOCKEY
Rams top PVR
Southwick 3, Pioneer Valley Regional 1
Southwick climbed within one game of .500 at 3-4 with a road victory.