WESTFIELD – The Salvation Army of Westfield is gearing up to provide turkeys to families throughout the city for Thanksgiving.

A volunteer run service, the Westfield branch of the Salvation Army is short 40 to 50 turkeys. According to Salvation Army Volunteer Service Coordinator Laurie Matthews, they are providing meals to around 240 families throughout Westfield for the upcoming holiday.

Matthews said that her volunteer service is looking for any way to raise enough money so more turkeys can be available to the proper amount of families.

Students at Westfield State University were able to raise enough money at the school to donate 145 turkeys to the Salvation Army.

The Westfield State students have attempted to get more turkeys donated each and every year the Salvation Army has done this.

“The students at Westfield State have great goals to make this higher and higher each year,” said Matthews. “I’m very pleased.”

In another effort to erase the 40 to 50 turkeys that are short, the Salvation Army is accepting donations at Amelia Park Ice Rink in Westfield. 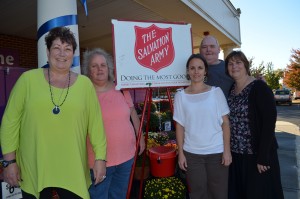 Member of the Westfield branch of the Salvation Army have been working on fundraising efforts in order to provide turkeys to every family on their sign-up list. Pictured from left to right is: Mary Lou Dazelle, Anita Barnes, Emily Mew, Rob Matthews and Laurie Matthews.
(WNG File Photo)

Speaking with employees of Amelia Park, Matthews and her volunteers have borrowed space in the conference rooms of Amelia Park Ice Rink. The rooms will be used for families to sign up for a turkey or for the families already on the sign-up list to go pick up their turkey.

Any family who is waiting for a turkey, can go to Amelia Park Ice Rink to receive their turkey on Wednesday from 9 a.m. until Noon.

Families that aren’t on the list, will be able to stop by the same time on Wednesday and it will be first-come first-serve for families if there are any turkeys left over.

The sign-up period for a turkey started about three weeks ago and families were able to stop into Amelia Park Ice Rink and fill out paperwork as long as they were income approved.

Matthews noted that some of the families that may have signed up either had a recent emergency like a death in the family or a family member that may have lost their job.

“Those are families that we want to do all that we can for,” said Matthews.

Being a volunteer for 16 years, and now the service coordinator the last two years, Matthews was amazed when meeting with the families who have recently reached out to the Salvation Army.

“The demand is just astronomical,” said Matthews. “I was just blown away the last two weeks with families that I’ve met with that have never used our services before.”

As Matthews is looking forward to seeing families stop at Amelia Park Ice Rink on Tuesday and Wednesday for their turkeys, or to sign up, any sort of donation can help.

Besides accepting more turkeys, the Salvation Army will take any of the fixings for a Thanksgiving meal, vegetables, and as well as gift cards towards a grocery store.

“This way we can make sure we are feeding as many families as possible,” said Matthews.

The Westfield branch for the Salvation Army has also been staying in close contact with a number of other agencies in Westfield to work together and help families in need for the holiday.