“As we were on the radio people heard about it and came in and asked, and in the last hour of the radio show there were six more families who requested food,” Stefan Czaporowski, school superintendent and co-organizer of the drive, said.

This was no small request. The food was a Thanksgiving dinner, complete with turkey and all the fixings. Plus, Czaporowski, Ward 2 councilor Ralph Figy, his wife Sue, and the rest of the organizers, already worked hard to exceed the amount that they gathered from the year before and it was considered a success. 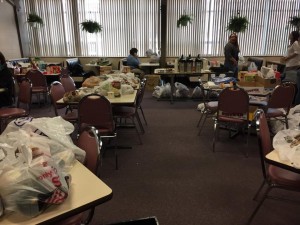 Food on top of desks that were donated to the radio food drive Monday. (Photo credit: Greg Fitzpatrick)

Still, the group took it upon themselves to try. Pleas went out, shopping was done, donations were made. And when the drive was all over, six more families had dinner to put on their tables this Thanksgiving.

The school department, in conjunction with 89.5 FM WSKB and Westfield State University, had a radio marathon from 6 a.m. to noon yesterday at Westfield Technical Academy to collect donations for local families and the Westfield Food Pantry. Many radio and local personalities participated, asking the community to donate to those in need.

The community did not disappoint. 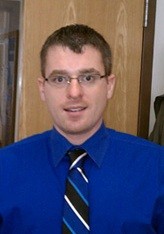 “It was just impressive, the generosity of this community does not cease to amaze me ,” Czaporowski said.

The food drive at Westfield Technical Academy provided meals for 83 families, while a separate collection at Munger Hill Elementary School provided dinners for an additional 27 families.

The drive had contributions from many sources, including two local farms–Ray’s and Swazlowski–who donated fresh squash and potatoes to accompany all the meals; Big Y donated reusable bags for the food to be carried and delivered in; Coldwell-Banker provided gift cards to purchase other goods, such as gravy and pans to cook food in.

However, it was the residents who came through to provide for the families. 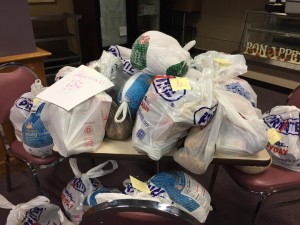 “Individual people just kept coming in bringing in turkeys, it came from private citizens,” Czaporowski said. “The majority of food came from residents.”

Czaporowski said that the drive ended up gathering so many turkeys that some were given back to the Food Pantry.

In addition, the drive collected several other items, including canned goods and toiletries, which all went to the Westfield Food Pantry.