WESTFIELD – Today is pep rally day at Westfield High School, and the student council has big plans for it. First, every student walking into school this morning found a paper hand turkey with a message of thankfulness, or a Thanksgiving joke on it, taped to his or her locker. The 60+ members of the student council, all elected class representatives, made more than 1200 turkeys for the project. 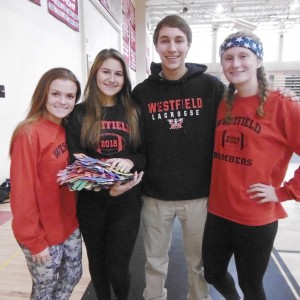 Then, the last two periods of the day is the pep rally run by the student council.
According to student council president Erin McDermott, traditionally the pep rally got students revved up for the Thanksgiving football game against Cathedral High School. This year, WHS will be playing 30 alumni from the classes of 1993 to 2014 in a Thanksgiving Day alumni flag football game at 10 a.m. on Bullens Field. 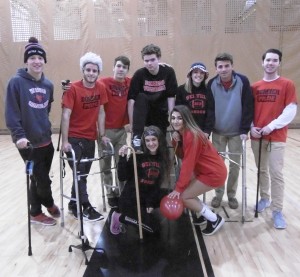 The student council practicing a skit featuring members of the alumni team for the Thankstgiving game. (Photo by Amy Porter)

The alumni were being given harsh treatment in a skit being practiced on Monday in the gym. While the WHS team looked athletic and capable, the alumni team was using walkers and canes in the dance off skit. Student council co-advisor Andrew Joseph said the group practiced three times a week for the last three weeks for the skit.

Two students, Marissa Otero, secretary, class of 2017 and Kohl Lanandini, vice president class of 2018 also made a video of students in the school saying what they are thankful for, called “The Thankful Video.” They interviewed 150 students for the video. 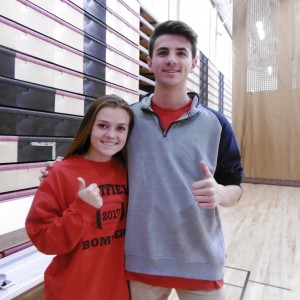 Marissa Otero and Kohl Lunanadini made a “Thankful Video” for the pep rally, interviewing 150 students. (Photo by Amy Porter)

“They are a highly motivated group of people, they take the traditional pep rally pretty seriously,” Joseph said. Gymnastics, cheerleading and the band and jazz band will also participate in the pep rally. There will also be a championship volleyball game, an annual fundraiser for the swim team.
“We try to make school more enjoyable. We hold dances, one-act plays, the pep rally. We put on a lot of events to make school more fun,” McDermott said. 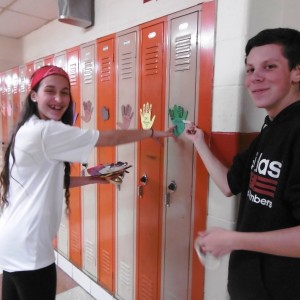 Community service is also a part of the activities of the student council, according to co-advisor Christina Breed. She said recently, they participated in the JDRF One Walk raising funds for juvenile diabetes and Toph’s Troops. This year marked the largest donation from the student council to Toph’s Troops, with the student council raising $4,278, $845 more than last year, and contributing to Toph’s Troops being the number one fundraising team in Western Ma and Northern Ct with a total donation this year close to $19,000.
Today, each class will be wearing different colored class t-shirts, and exhibiting their “Bomber Pride.” 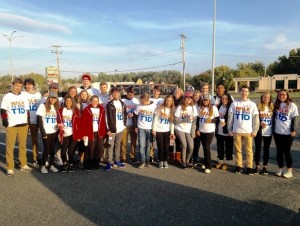 The student council raised over $4,000 for juvenile diabetes and Toph’s Team at a recent fundraising event. (Submitted photo)