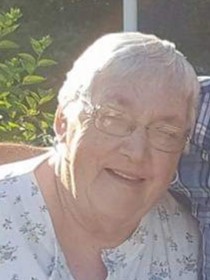 Westfield-Sandra J. (Martin) Jasmin, 79, died Saturday, March 21, 2020 at home. She was born in Gardner, Maine on February 25, 1941 to the late Wilmer and Mildred (Welch) Martin. She was a 1959 graduate of Westfield High School. She attended Holyoke Community College. She worked at Noble Hospital since 1991 in the House Keeping Dept. Sandra was also a teacher’s aide at Westfield High School and was a volunteer for the Salvation Army. Sandra was a member of the First Congregational Church where she was a Deaconess. She loved going on trips with her friends. She was an avid attendee of the Big E,  and she worked there many years. She was a great mother, grandmother and great-grandmother she will be dearly missed. She was pre-deceased by her husband Raymond P. Jasmin in 2014. She leaves her children Doris Gonzales of Westfield, Tammy Jasmin of Colorado, Melissa Fanion of Westfield, her grandchildren Kristi and Kellie Gonzales, Dakota, Destiny and Dale Fanion, Dale Jasmin, great-grandchildren Jasper and Jase Gonzales. She also leaves her siblings Robert and Julia Martin of Maine, Joseph and Cindy Slocom of Texas, Tony and Sue Slocom of Maine, Rick and Eileen Slocom of PA and Donna Hobart of Springfield. Sandra was predeceased by her son Tom T Liquori, and her brothers Donald and Ronald Brantley. The funeral and burial will be private. Donations in memory of Sandra may be made to the Shriner’s Hospital, 516 Carew Street, Springfield, MA 01104. Firtionadams.co