WESTFIELD – Almost every School Committee meeting begins with a presentation by one of the schools. On Monday, Russell Elementary School third graders demonstrated how they are learning numbers and operations in tens with sand bags and hula hoops. Principal Alison Hamilton said the idea came from a summer workshop on inclusion attended by third-grade teachers Deborah Chouinard and Kim Disessa, who coordinated the activity with physical education teacher Michele Tarbox. 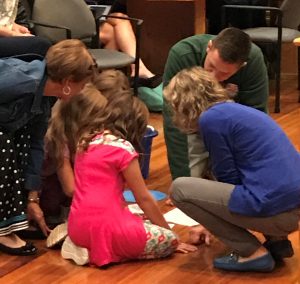 The six students split into a boys and girls team, aided by volunteers Brent B. Bean, II and State Representative John C. Velis. The students and volunteers then took turns throwing the sand bags into the hoops, which were valued at multiplications of tens, from 1 to 1,000. After throwing all the sand bags, they added up the scores, with the City Council president’s team coming out on top.
Following the lively presentation, student representative Payton MacTavish from Westfield Technical Academy reported on various activities at the school, including a required plug for WSKB’s Tiger Talk on Thursdays from 8 to 9 a.m. with principal Joseph Langone and student services coordinator Rob Ollari.
MacTavish said Tiger’s Pride restaurant has recently received an upgrade with new paint and ceramic tile, donated by the Home Depot. She said the restaurant is hoping to reopen to the public, with a tentative date of Wednesday, October 11.
Gifts announced at the meeting included a photocopier valued at $750 from John Liptak, CPA to Sherry Elander at the East Mountain Road transition program. Mayor Brian P. Sullivan thanked Liptak for making the donation work in terms of delivering the copier and helping the program get a service contract, which he said is often a challenge.
Westfield Public Schools Superintendent Stefan Czaporowski said the district is focusing this year on early college opportunities for students in both high schools. He said currently there are 45 students in Westfield High School and 37 at Westfield Technical Academy participating in dual enrollment.
He said they have also made progress in an articulation agreement with Embry Riddle University for students in Westfield Technical Academy’s Aviation Program. WTA students that successfully pass the FAA Part 147 Exam would be able to earn a total of 48 credits for Air Frame and Powerplant, 30 credits for Air Frame OR Powerplant, or 12 Credits for General Aviation Curriculum. Students that do not successfully pass the exam may be able to earn credits upon review by Embry Riddle. Credits would be applied to either an Associate’s or Bachelor’s degree or for an A & P certificate.
Czaporowski also said the school district is collaborating with the WSAA, Westfield YMCA, Westfield Boys and Girls Club, and Freedom Credit Union to help out the victims of Hurricane Maria in Puerto Rico. The District Office on the first floor of the Westwood Building will be accepting donations this week from 8:00 a.m. – 4:00 p.m. A list of needed items is available on the district’s Facebook page at Westfield, Ma Public Schools. He said all items need to be in the office by 12 noon on Friday, October 6 to be added to the shipment.
Mayor Sullivan said that financial donations are appreciated, as getting shipments into the country and out of the ports to the people has proven difficult. He said that the Westfield Spanish American Association (WSAA) is also working on collecting donations.
School Committee member Ramon Diaz, Jr. said the first shipment was sent out by WSAA on Monday, and agreed that there has been a problem getting things shipped out. “Any help they can get is well appreciated,” Diaz said.
Mayor Sullivan also thanked the School Committee and Westfield Public Schools for the huge contingent at Westfield Day at the Big E, mentioning in particular Patrick Kennedy and the Westfield High School marching band. “It was a great turnout, and a great night,” Sullivan said.