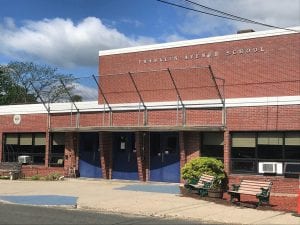 WESTFIELD – The Franklin Avenue School Building Committee met on Jan. 12 to vote on the preliminary design packet (PDP) that will be submitted to the Massachusetts School Building Authority this week.

Architect Bert Gardner of Caolo & Bieniek Associates of Chicopee said the packet includes all of the designs that they will present to MSBA, for both a single school that does not include Abner Gibbs students, which the city is not interested in pursuing, and a combined school which includes both populations.

At the meeting, Gardner reviewed the design for a new combined single story school that the committee requested, but had not yet seen. Designing a single story school was made possible by the pending acquisition of an adjacent property on Franklin Street. The acquisition of the property will also make it possible to access the school from Franklin Street.

The design alternatives in the packet, a total of nine, included both ones for a new building, and ones for an addition and renovation to the existing Franklin Avenue Elementary School building.

Gardner and Owner’s Project Manager (OPM) Dan Pallotta said after the MSBA board reviews all of the designs they will return comments on them. He said comments should come back fairly soon, and the committee will have two weeks to address them. He said in 45 days the PDP will be resolved.

The next step will be to prepare a preferred schematic report (PSR), during which they will present all of the designs to the MSBA. Pallotta said at that point they will make clear that Westfield is not interested in a single enrollment plan.

Gardner said they will look at all of the dual enrollment options, decide which is the most viable, and get cost estimates for construction by April, which will be due in May.

“By April, hopefully we’ll have an option that the city and committee feels is the right one, and we’ll have the real estimates done,” Gardner said. He said the PSR will wrap up in the summer. “I’m sorry to say, we’ve got a lot more of these meetings to go – exciting nonetheless,” he added.

“The plan for the single story is a great plan. I envision that being flipped 180 degrees should we obtain the parcel on the corner,” Pallotta said, referring to a second abutting property next to the armory that the city has expressed interest in with the owner. “What we’ve demonstrated in the PDP is there are plenty of options, and a little way to go,” he added.

Pallotta said the committee is right on target with the MSBA schedule. The committee then voted to approve the PDP.

Committee vice-chair Tammy Tefft said some people in the community thought the committee would be voting on a design for the school at the meeting, and asked Pallotta to talk about the next phase.

Pallotta said after the committee settles on the preferred schematic designs to pursue, there will be public outreach for visioning. He said the PSR phase has to include public comments and outreach, and they will get input from the neighborhoods and concerned parents.

“These are the steps required by the MSBA. Lots of visioning – it’s important for the school community, parents and the community to get excited,” Pallotta said.

Committee member and Ward 3 Westfield City Councilor Bridget Matthews-Kane said she received a letter from former school committee member Jeffrey Gosselin asking to be involved in the committee as a community representative, and saying he would like a special meeting for residents of Ward 3.

Pallotta said a change in the building committee requires approval of the MSBA. He said when it was formed by the mayor, the committee was submitted with an indication of what each member represented. “It’s not common to be adding or subtracting people to a committee that’s already been formed,” he said, adding that more people will have an opportunity to become involved through the community forums.

Mayor Donald F. Humason Jr., who chairs the committee, said they have 16 members who have been active since the beginning. “There was no intention to leave anyone out. I’m not inclined to change the committee at this point. People will have a chance to be involved. We will have a better project in the end if people do get involved,” he said.

Tefft added that at some point, they will be meeting in person, and there will be a lot of opportunities for the community around the school and as a whole to be involved.