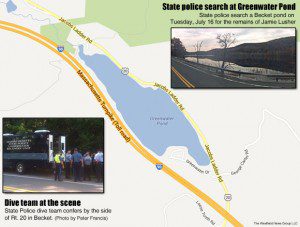 BECKET – James Lusher looked out on Greenwater Pond Tuesday morning, smoking a cigarette as his eyes scanned the 88 square acre body of water, hoping that the dive teams of the Massachusetts and New York State Police would be able to bring to the surface remains of his son, Jamie, who disappeared in 1992. The youth was last seen leaving his Westfield home on his bike on the way to his grandmother’s house in Blandford.
“To this day, when I see a kid on a bike with black hair, I will instinctively look back,” Lusher told the media in a press conference at South Middle School in Westfield Monday. “You can’t imagine what it feels like.”
Lusher was accompanied by his family at the pond and declined to speak with any media Tuesday, choosing instead to look on from a shaded spot by the side of the pond, in the hopes that something, anything, could be recovered.
This cold case heated up when Hampden District Attorney Mark Mastroianni said yesterday that Lewis Lent Jr. confessed to killing Lusher and told authorities where to find the remains. Lent is spending life in prison after pleading guilty to killing Jimmy Bernardo of Pittsfield in 1990 and Sara Ann Wood of Frankfort, N.Y., in 1993. Sara Ann’s body has never been found.
Six boats carrying eighteen divers from the Massachusetts and New York State Police, along with a helicopter carrying the commanders of both state’s units, began combing the pond Tuesday morning, and will continue to do so  tomorrow and Thursday, in search of the remains of the boy, who was sixteen at the time of his disappearance.
“The divers will be conducting a grid search from the point that we believe is the location of entry for Jamie Lusher,” said said David Procopio, spokesman for the Massachusetts State Police. They were looking for bones, clothes or shoes in the pond that is up to 58 feet deep, with a bottom covered in sediment.
According to authorities, if nothing is uncovered in three days, the dive team will look for future opportunities to continue their search, depending on their availability.
“They are a state-wide agency that deals in salt and freshwater bodies with rescue, recovery and homeland security missions… So they have a full plate. But when they do have a free day, they will get some divers back here,” said Procopio.
While authorities remain optimistic and realistic simultaneously, the Massachusetts State Police views the search as ongoing.
“If (the search) is not as fruitful as we had hoped, it is not necessarily the end of this,” said Procopio. “We will not forget Jamie Lusher, and we will continue our commitment to finding something.”
The area of the pond which faced the most intense scrutiny is a spot around it’s midpoint, near a shoulder of Route 20.
“Intelligence indicates that that is where (Lent) dumped the body,” said Procopio. “Detectives have attached a level of credibility to his (Lent’s) statements.”
In addition to the dive teams, Procopio also informed the media throng that the boats would be employing side-scanning sonar equipment in an effort to find objects such as bones or clothing in the depths of the water, which was relatively clear Tuesday morning, despite several inches of silt settling on the pond’s floor.
As the pleasantly warm morning morphed into a sweltering afternoon, cars passing the zoo of media and the fleet of police vehicles parked on both sides of Route 20, looked on in bewilderment as they were waved through by western Mass. State Troopers, almost in disbelief that an event of this magnitude could ever happen in their tiny corner of the Commonwealth.
Ned Hayes and Theresa Sorrentino, both retirees from neighboring Lee, were relaxing pond-side this morning and looked on as two of the largest and most powerful state police agencies in the eastern United States threw their dive teams into the pond to search for a young boy who disappeared over two decades ago.
“I am hoping they find something,” said Hayes. “My thoughts go out to the family. It’s such a tough situation. There’s a lot of uncertainty but the community has been very supportive of the investigation.”
Sorrentino, who is also a friend of the family of Lent’s first victim, James Bernardo, feels for the loved ones of each of Lent’s victims.
“To have this (search) brought up, it brings the case back for the them, as well,” she said of the Bernardo family specifically, whose son’s body was discovered in Newfield, New York in November of 1990, almost 200 miles west of Pittsfield. “You learn to cope with it after awhile, and then it gets brought back.”
Tuesday’s search ended at 2 p.m. and is set to resume Wednesday morning at 8 a.m.