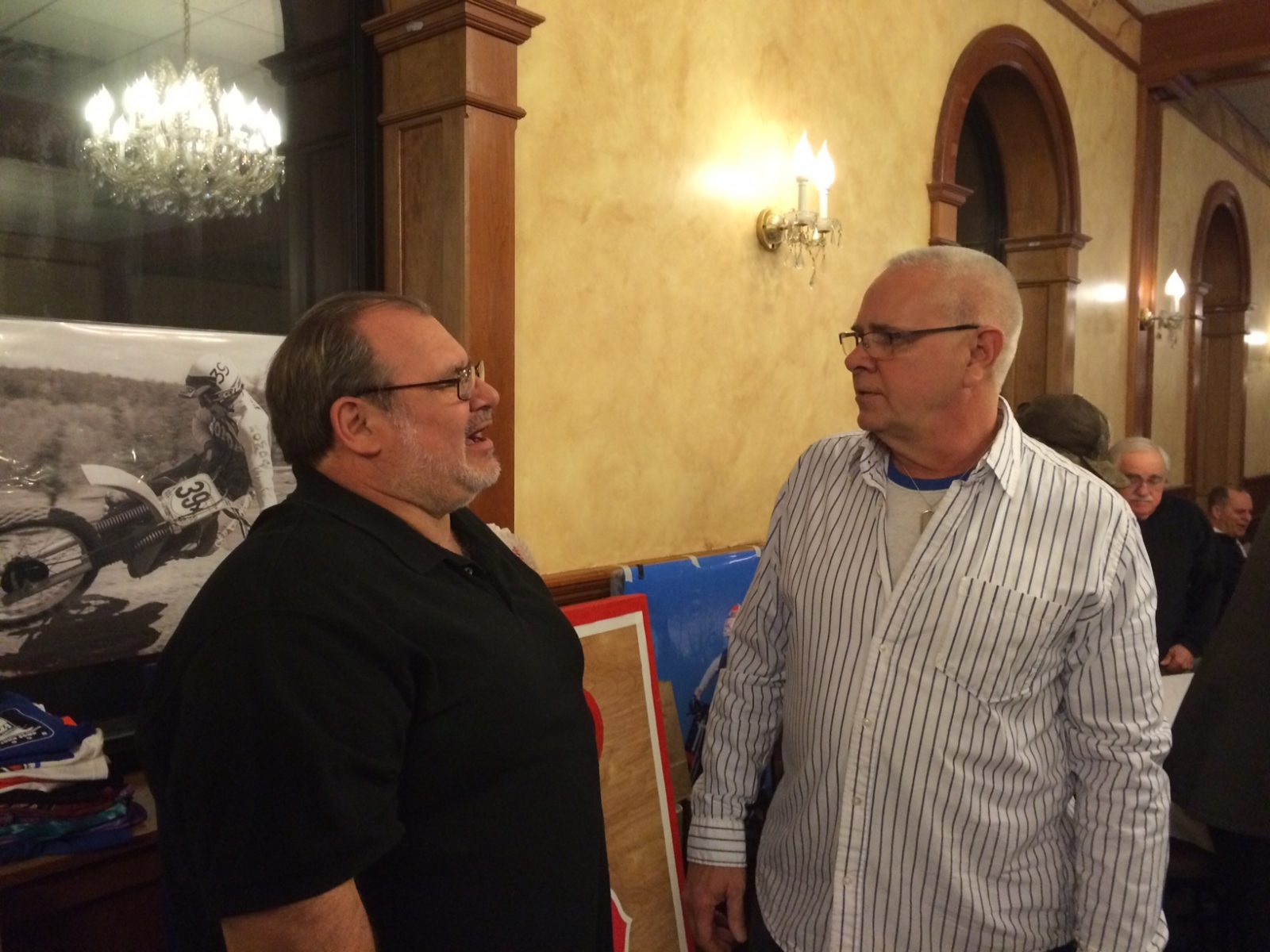 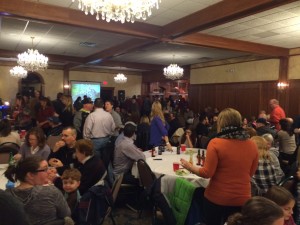 Roma Restaurant is crowded with supporters of Team Justice Jan. 30 during a fundraiser for the motocross team. (Photo by Hope E. Tremblay)

SOUTHWICK – Team Justice Racing is back on track following a fundraiser Saturday night.
After three of the team’s motorcycles were stolen from Team Justice President Kevin Bisop’s own garage, the community came together to make sure the team wasn’t going to eat asphalt before the season began.
“The money raised here will really have an impact on the 2016 races,” said Bishop.
Organized by Jessica Bishop and Melissa Bridges, the “Team Justice Season Rescue” fundraiser featured endless pizza and soda, live music, and numerous raffles.
“They sold out,” said Bishop, a Southwick Police lieutenant. “Two hundred tickets were sold.”
Bishop said he was overwhelmed by the support of the town and motocross community.
Former Southwick Motocross 338 promoter Ralph Pittello was on hand to support his longtime friend Bishop and the youth he mentors through Team Justice.
“We have always been close,” said Pittello. “We care a lot for the team and I’d do anything for that crew.”
Pittello said motocross is a challenge, and overcoming the loss of the stolen bikes was a challenge they would overcome.
“It’s a shame, especially because of everything the team stands for,” he said.
Team Justice formed in 2004 to offer at-risk youth a positive way to spend their time.
Austin Brooks is one of those youth whose life is a success story in part because of Team Justice. His motorcycle was one of the stolen bikes.
Brooks, 18, began riding with the team at age five. When asked what being part of the team meant to him, he said “everything. It means everything, and everyone I race with is family.”
Brooks credited Team Justice with shaping his life.
“I wouldn’t be who I am without the team,” Brooks said.
Bradley Austin, 22, is not a team racer but he does ride and has been traveling with the team for five years. His bike was also stolen.
“I was in disbelief,” Austin said.
However, seeing all the people at the fundraiser gave him hope for the 2016 season.
“I can’t believe how many people came out and supported us,” he said.
The third stolen motorcycle belonged to Robbie Bombard, 18.
A member of Team Justice for four years, Bombard thought Bishop was joking when he texted about the theft.
“I really thought it was a joke,” he said. “I went to his house and saw that they were gone.”
Bombard was devastated and thankful to all who made donations to the team. He said Team Justice actually helped bring his own family together.
“We all ride – my mom, sister, brothers,” he said. “It really brought us together.”
Bishop said the value of the three bikes was about $22,000.
Friends, family, and even a few strangers came together Saturday. Bishop said there were many former riders there, including Robert Slate, Jr.
Slate rode with Team Justice for five years and was impacted by the group. When he heard what happened, he wanted to give back and donated his skills by creating T-shirts, stickers, and the tickets for the event through his company R2 Prints.
“I was introduced to the team in 2007,” Slate said. “It helped me stay out of trouble and gave me a place to ride and someone to talk to.”
Jessica Bishop, Kevin’s daughter and a member of the Southwick Fire Department, said she was thrilled with the turnout Saturday.
“It’s just amazing,” she said. “The outpouring of support from the community . . . I can’t thank people enough. I would say the 2016 Race Season Rescue was a success.”