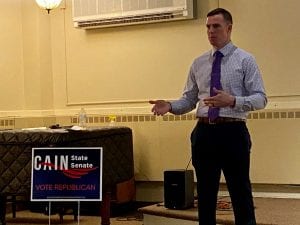 WESTFIELD –  John F. Cain, a candidate for the 2nd Hampden and Hampshire Senate seat, told The Westfield News he voted in Southwick in the 2016 presidential election, however, records show he did not.

When asked about his voting record, Cain wrote in an email that he voted in the 2016 presidential election. The Southwick Town Clerk’s office stated March 19 that it has no record of Cain voting until the March 3, 2020 primary. He did participate in the fall, 2019 Southwick Town Meeting,

Cain stood by his statement that he did vote in Southwick in 2016 when The Westfield News gave him the opportunity to produce a 2016 record. Cain spokesperson Sheila Pecor said she was “not sure why there was a discrepancy” with his record and noted Cain said he voted for Donald Trump in the general election. She also stated that Cain would not be changing any of his comments because they were “the truth.”

Velis said he would not ask others to support him with a vote without making voting a priority himself.

“To me, it’s simple,” he said. “How could I in good faith ask others to place their faith in me and vote for me as an elected office holder if I never exercised or seldom exercised that precious right myself?”

Cain stuck to his statement and said before 2016, like many Americans, he didn’t think his vote counted.

“Prior to 2014, I worked as a marine engineer officer aboard merchant vessels where I was offshore 180 days per year,” Cain said. “Along with this was my Naval Reserve duty, which many times brought me across the country. This usually prohibited my attendance at the polls.”

Cain said he did not think his vote made enough of a difference to vote by absentee ballot. Since then, he said, his outlook on voting has drastically changed.

“At the time, I was like many Americans, and apathetic.  I did not realize that each vote mattered and never sought out an absentee ballot,” he said. “It wasn’t until I really ‘came home’ full time and took over my family’s business that I completely understood the impact that government has on people’s day to day lives.”

At the same time, Donald Trump was running for president.

“It was at this time, seeing so many other working class people standing up to join together, that I realized that perhaps one vote doesn’t matter, but together, we can make a difference,” said Cain. “It was this campaign that energized me and as I continued to get educated by life and the media, I realized that something different needed to happen. I also realized that not many of my peers were very active in our civic duties, and that was concerning.”

Despite not recognizing his vote counted, Cain said he did realize early on the importance of service.

“Prior to this time, I had always realized the importance of public service, community and getting involved,” he said. “As a young man, I was an Eagle Scout, and as an adult, became a volunteer firefighter.”

Cain said his vote in 2016 made a difference.

“In 2016, I voted because I knew my vote would help the many others who were coming out of their silence to take a stand for what we believe in and make a difference,” he said. “Together, we had a voice. It is this voice, the voice of western Mass., that I will take to Beacon Hill.”

The Westfield News also obtained a document from the Town of Southampton, where Cain resided for a short time, stating he had no voting record there in 2016 or any other year.

Velis said voting was always a priority and his duty as an American.

“Voting is, in my opinion, the most sacred and important right we have as Americans,” Velis said. “Many people, including friends of mine, have died to protect this most precious freedom. In fact, in 2018, I wasn’t on American soil. I was deployed to Afghanistan during the 2018 American midterm elections where I reflected upon the freedoms we have here in America. When I was away from my home land I was struck by the intensity of our sacred right to vote as I cast my absentee ballot from a foreign land.”

Velis said he tells young people that voting is their right and should be exercised.

“The other day I spoke at an elementary school in Westfield about many things including the importance of voting,” Velis said. “I told them about an experience I had in the United States Army involving Afghanistan’s 2018 Parliamentary elections. We were trying to encourage as many Afghans as possible to vote in order to enhance the legitimacy of the elections. The problem that many Afghans confronted was that a simple walk to the polls could result in loss of life or limbs; or in the best-case scenario, being kidnapped. And yet thousands upon thousands of Afghans defied those odds and went out and voted. That story will forever be ingrained in my heart. Those Afghans didn’t take their right to vote for granted, nor should we.”