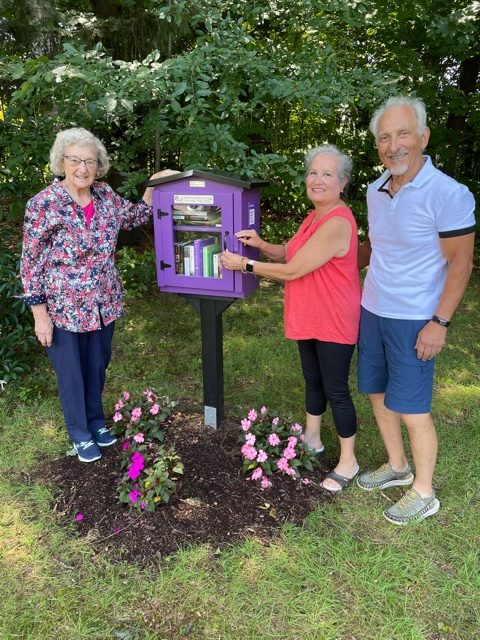 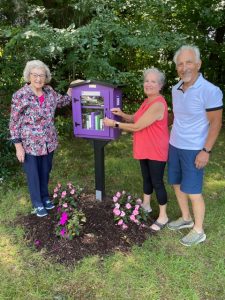 Sister Elizabeth Oleksak, S.P., on left, played an integral role in dedicating a Little Free Library to honor Ana Nunez, second from left. Art Demas, on right, helped with setting up the library. The couple married in 2015. (LORI SZEPELAK PHOTO)

WESTFIELD — A longtime connection to Sister Elizabeth Oleksak, S.P., came full circle last month when city resident Ana Nunez was surprised by family and friends with a Little Free Library in her honor on the Mill Street campus of the Genesis Spiritual Life & Conference Center.

“Reading has always been my escape,” said Nunez, who had been employed at Baystate Noble Hospital for many years and retired from her 42-year nursing career on May 28 at the D’Amour Center for Cancer Care in Springfield.

The idea of the Little Free Library as a gift came to fruition when Nunez’s daughter, Alisa Arroyo, called Oleksak seeking input on how to honor her mother’s retirement. Oleksak is the foundress of Genesis.

Since Nunez was an avid reader, the idea of the Little Free Library quickly blossomed.

“We kept it a fantastic secret,” said Oleksak, noting she and Arroyo recruited Nunez’s husband, Art Demas, and her brother, Frank Nunez, to set up the Little Free Library on the chosen site. 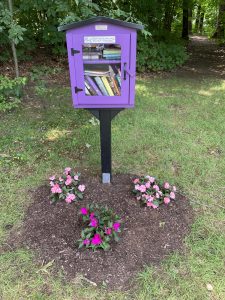 The latest Little Free Library in Westfield is on the grounds of the Genesis Spiritual Life & Conference Center. (LORI SZEPELAK PHOTO)

“I love purple and my passion has always been working in the oncology field so I could help others,” said Nunez.

On the day of the surprise unveiling, July 17, Demas had suggested a motorcycle ride around the city to Ana and when they arrived at Genesis, Nunez noticed a group of people standing in the lush grasses adjacent to the side door of the main Genesis building.

When Demas drove the motorcycle on the grass closer to the people, Nunez was in shock, since she didn’t want to interrupt the gathering.

To her surprise, she soon noticed familiar faces of family members and friends who had surprised her by being a part of the festivities.

“I didn’t know anything,” said Nunez, adding that some family and friends also jumped out from behind the trees to yell “surprise.” 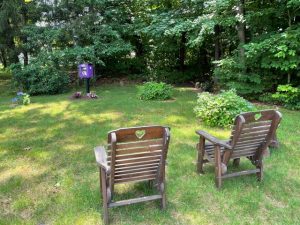 A Little Free Library is now on the grounds of the Genesis Spiritual Life & Conference Center in Westfield, in honor of Ana Nunez of Westfield. (LORI SZEPELAK PHOTO)

Everyone who attended the unveiling also brought a book to donate to the library.

“There is a real eclectic range of works here,” said Oleksak.

Nunez explained that she first met Oleksak many years ago when she was a single parent raising three children — Alisa, David and Julie.

“I attended a retreat by Sister Elizabeth and she helped me during a difficult time in my life,” said Nunez as she teared up. “She is caring, compassionate and nonjudgmental and I knew this was a sacred place.”

Nunez said her faith has also played an integral role in her life.

“I am blessed and feel grateful for the 42 years to be of service in the community I love,” she said. “I loved my nursing career and was blessed to be able to complete my dream of helping others with cancer.” 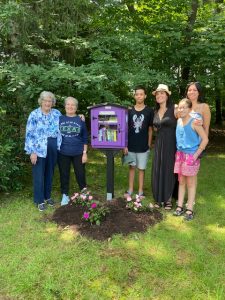 Sister Elizabeth Oleksak, S.P., founder of the Genesis Spiritual Life and Conference Center in Westfield, stands next to Ana Nunez, who was honored with a Little Free Library by her family. Also pictured are Lenox Greene, Alisa Arroyo, Nia Arroyo and Sofia Arroyo. (NUNEZ FAMILY PHOTO)

Nunez added that her daughter more recently had attended a biospiritual class led by Oleksak, so she felt comfortable reaching out to her for ideas.

“I am so honored by this little library,” said Nunez, adding, “it is so deeply touching and priceless to me that Sister Elizabeth has allowed the little library to be on these sacred grounds.”

Nunez said at her retirement gathering that her son David and his wife Veronica gifted her a trip to Puerto Rico, and daughter Julie has planned a Seattle trip.

“Each of my children gifted me in their own unique way,” said Nunez.

Now that the Little Free Library has found a home at Genesis, Oleksak welcomes area residents to visit the grounds and take in all of the sights that nature provides.

“We encourage everyone to bring a book and take a book and sit in our wonderful surroundings and read,” said Oleksak.