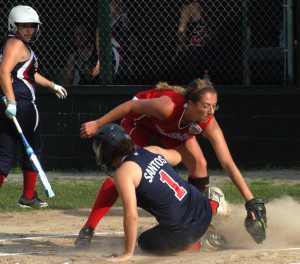 WINCHENDON – Little League’s All-Star summer came to an abbreviated ending Saturday.
Behind the superb pitching of Shannon Pires, brute force on offense, and strong defensive prowess, the Peabody Little League Softball Senior All-Stars outplayed Westfield to the tune of 15-1 in five innings late Saturday in the state finals at Jimmy Pedini Memorial Field in Winchendon. The loss knocked out the Whip City, which fell 16-4 earlier in the day.
Pires (6 Ks) pitched a two-hitter. Peabody lead-off batter Ashley Jenkins finished a home run short of the cycle with a triple and two-out, two-run double, both of which came in the first inning. The latter capped off a seven-first inning.
No. 2 batter, Ashley Ghostlan also singled, doubled, and tripled, and drove in two runs for Peabody, and Katie Tarisi went 3-for-3 with two doubles and three RBIs.
Westfield had something going early as Ashlie Baker and Arielle Baillargeon walked with one out in the top of the first inning, but Pires settled down to force a ground out and long fly out from Mahlia Reyes to end the threat.
Westfield finally cracked the scoreboard in the fourth inning.
With one out in the fourth, Carlen Gideon walked, and Reyes and Sam Schippe singled to load the bases. Erika Wolfe walked to score the team’s lone run. Pires struck out the next two batters to end the inning.
Jill McCormick, the starting catcher allowed just one hit in relief for Westfield in the bottom of the fourth. Peabody’s Sara Hayward closed out the game on the mound for her team.