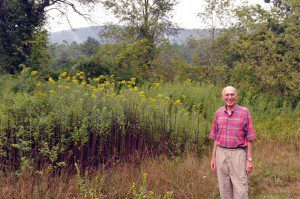 Seth Kellogg, of Southwick, offered 130-plus acres of land to the town to purchase for conservation last year but problems arose when two abutting land owners spoke up because they said they have right of ways to use the property. One has land-locked property in the woods used for logging. (File photo by Frederick Gore)

SOUTHWICK – The town may have reached a compromise to issues surrounding the Kellogg family property.
Owner Seth Kellogg offered 130-plus acres of land to the town to purchase for conservation last year. On the ,recommendation of the Community Preservation Commission (CPC), Town Meeting voters approved purchasing the property for $185,000 out of CPC funds. The remainder of the cost of the property, valued at $540,000, came from a state land grant. A trust for the 134 acres of land would be held by the Winding River Land Conservancy and would include conservation restrictions.
Problems arose when two abutting land owners spoke up because they said they have right of ways to use the property. One has land-locked property in the woods used for logging.
CPC member Dennis Clark and Kellogg told selectmen they think they have a solution that would satisfy all interested parties while still preserving the land.
“We have what we think is a solution and it wouldn’t have to go back to Town Meeting,” Clark said.
Kellogg said a right of way would be given to the logged property along the border of the property.
“Access is not a problem anymore,” sad Kellogg. “The bonding dispute is a problem – there has been slow progress on that.”
Kellogg said he and Clark, in conjunction with attorneys, have devised a way to move forward with the purchase and still allow use of the land by the two men.
“The town will pay me and I will put $80,000 in an escrow account, pending proof that he owns the land,” Kellogg said of the logger. “We’ve discussed an easement where he can use some of the property he is claiming is his.”
The $80,000 would cover the cost of approximately 20 acres of land. If a judge rules it is not Kellogg’s property, the $80,000 would be turned over to that property owner.
Chief Administrative Officer Karl Stinehart said town counsel has reviewed the plan and because the purchase amount from the town does not change, it does not need to go back to Town Meeting.
Much of the land is wooded and has numerous trails. Munn Brook flows through it, as does a smaller waterway called Dead Brook, said Kellogg. There are marshlands and endangered species, as well as forests. And, the brooks are stocked with a variety of trout.
Kellogg said there are two fields on his property, one of which is included in the sale. He said as a kid, there was tobacco in the field and cows grazing along the brooks.
Town plans for the land include passive recreation.