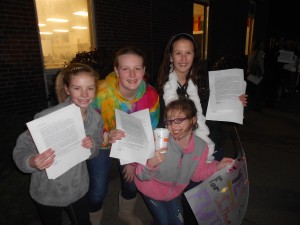 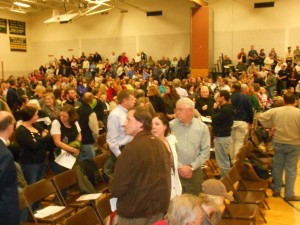 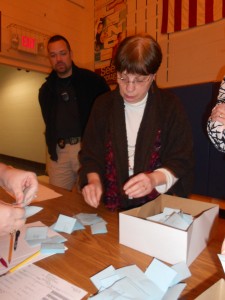 SOUTHWICK – With a vote of 446-183, Southwick voters approved a debt exclusion to pay its share of a $72 million school renovation project last night.

Now, it is up to the voters of Tolland to ensure that the project will move on to a Jan. 31 ballot question in all three towns. A Special Town Meeting tonight in Tolland must receive two-thirds approval in order for the project to move forward to the election vote.

Superintendent of Schools Dr. John Barry said if any of the towns does not pass the proposition 2.5 override at town meeting or on Jan. 31, “the project fails permanently.”

Southwick Town Clerk Michelle Hill said the unofficial count of voters last night is 646. There are 6,255 eligible voters in town and Hill had planned for 1,000.

‘I thought we would have 1,000 voters and that’s what we planned for, but I did not expect any more than that,” said Hill.

This morning, Hill and her staff were double checking the number of voters last night and began preparations for the special election.

The project is unique because the Massachusetts School Building Authority (MSBA) is offering reimbursement for renovations to Woodland Elementary School, Powder Mill Middle School, and Southwick-Tolland Regional High School (STRHS) as a group. In order to take a campus approach to the project, Southwick, Tolland and Granville had to pass an agreement for Granville to join the regional school district at special town meetings in all communities.

The MSBA has signed a contract to fund 60 percent of the project, leaving nearly $30 million up to the towns to fund. Barry said necessary repairs to the three schools would cost $60 million if the district tackled them alone.

Some residents said they would rather make repairs as the district can afford it. Barry said the repairs are too big to handle within the operational budget.

With the plan, the footprint of Woodland would remain the same, including parking lots and drop-off areas. The building, which was built in the 1950’s with additions in the 60s and 90s, is solid, and meets education expectations. It does need work to meet codes and will receive replacement windows and mechanical upgrades to be more in line with the high school.

Powder Mill is in need of the most upgrades. All mechanical systems must be replaced. Windows will also be replaced with operational windows with sunshade for better efficiency and cooling on hot days.

At STRHS, administrative offices would be moved near the front entrance, as well as the nurse’s office and guidance counselors. Grades seven and eight would be a new wing at the front of the building, while grades nine – 12 would be in a wing at the back of the building. The middle of the school, including the gym and library, would be shared space. In every school, students would be separated by grades, so they could work in teams, and every school would have more space for special education and administrative work areas.

Barry said with the combination middle/high school, all students in grades seven through 12 would be able to participate in athletics, extracurricular activities and arts programs.

Following the vote, School Building Committee member Mark Gendron said he was happy with the results.

“I’ve been at this for six years,” said Gendron. “I feel very confident it will pass at election.”

Gendron’s wife Natalie was also happy with the approval.

Another supporter of the project is Christopher Pratt, whose children are in high school now and will graduate before the project is complete. He said it is a worthwhile project.

“This will afford our students the same opportunities other towns have in their schools,” said Pratt.

During debate of the article, one resident in favor of the project said Southwick students will graduate to a global community and they must be prepared for that community.

Several residents who do not support the project voiced concerns over the estimated $400 annual tax increase over the next 25 years.

Barry said that estimate is “conservative” and is based on a four percent bond rate.

“But if we bond tomorrow we will get a better rate,” said Barry.

A brief overview of the project was offered at the start of the meeting.