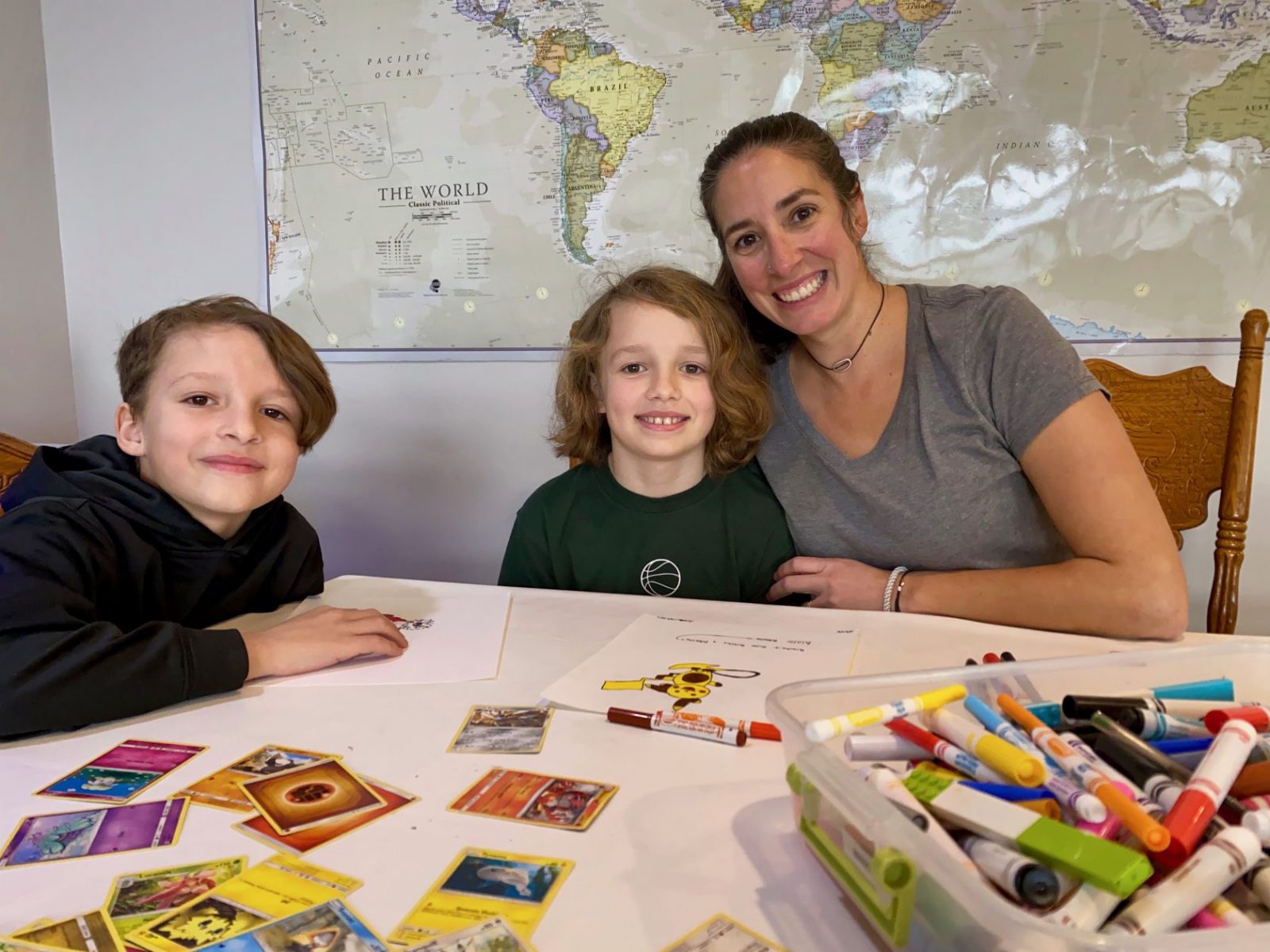 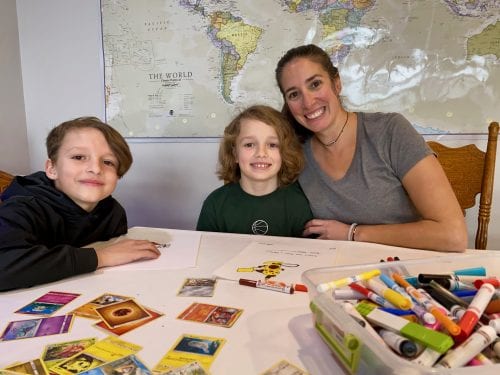 Aurelia Simonds at home with her sons Max (next to her) and Rex Simonds. (THE WESTFIELD NEWS SUBMITTED PHOTO)

SOUTHWICK – On March 17, working mom Aurelia Simonds started a Facebook group called Parent’s Homeschool Folder, partly because she needed help in guiding her two sons, 10 and 8, at home during this unexpected break. In less than two days, the page had 168 members.

Parents across the country are finding themselves in the position of being a “teacher” after schools shut down to help flatten the curve of the coronavirus outbreak. Simonds was at a loss the first day.
“Part of it I think was one of my children really thrives on routine,” Simonds said, adding that she quickly realized that she didn’t have that much insight on what her children are learning in school, and how they learn.
For example, she was doing a writing project with one of her sons, and he said it needed to be put in the “hamburger” format. “I had no idea what he was talking about,” Simonds said.
She looked it up, found an illustrated example online, and posted it in her group.
“Anyone else realizing they have very LITTLE knowledge on how their children learn? The tools and concepts they use on a daily basis that make it fun and easier for them, I’m clearly in the dark. I was schooled by my son how he needs to put things in a hamburger format when writing.”
Turns out the hamburger format guides kids to build a composition like you build a hamburger: Top bun – topic sentence; Tomatoes – supporting sentence; Hamburger – supporting sentence; Lettuce under burger – supporting sentence; Bottom bun – conclusion sentence.
Simonds said that the Southwick=Tolland=Granville Regional School District has online resources and a schedule for children at home, but added, “an at home schedule as if you were in school is very optimistic. A lot of parents don’t know where to begin, and it’s week one!”
In doing her search, she soon found a wealth of activities going on. “There’s so much out there,” Simonds said.
Some of the favorite resources that she’s found include virtual tours and live videos. For example, the Cincinatti Zoo posts a different lesson every day on a different animal.
Another favorite is Mo Willems’ live videos. Willems, a popular children’s book author and illustrator (“Don’t let the Pigeon drive the bus”), is doing a daily YouTube show called “Lunch Doodles with Mo Willems.”
Simonds said the videos are at a nice, slower pace, and offer a tour of his studio. “They’re enjoyable for my kids,” she said.
Simonds is also enjoying the different simple tips that other parents are sharing.
“I’m hoping it ends up being a huge resource for everybody – what’s working, not working. How they’re dealing with becoming a teacher, nurse and working at home all in one week,” she said.
Simonds was already working from home on her screen printing and embroidery business in Southwick, called 3 Tees. She said people are still looking for jobs to get done, although business has slowed because she does a lot of work with youth sports that would normally be gearing up right now.
One of her hopes is that teachers will join the group and share tips. She said it would be nice for her kids to see familiar faces.
She’s also had grandmas who are caring for the kids at home reach out to her, she said.
Staying positive, Simonds said she sees a possible silver lining in having the kids at home. “I’m wondering 10 years from now, what will these kids be like. This is a time for kids to find their creativity and passion and follow it.”
She said it’s also an opportunity to teach them how to cook, clean and do their own laundry.
Simonds said she probably spends an hour or two a day building up the Parents Homeschool Folder. “I’m really excited that people are using it. It’s keeping me positively distracted!” she said.