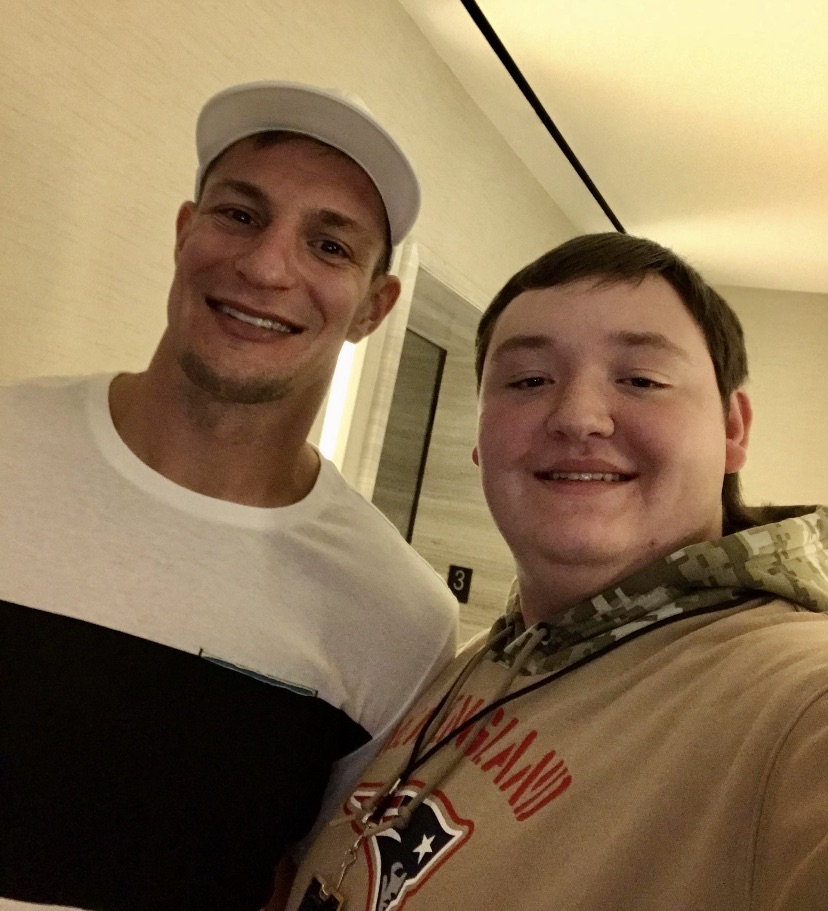 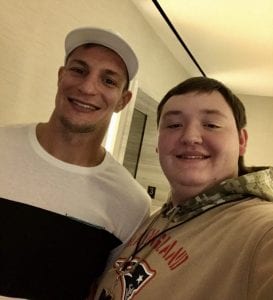 This past New Year’s Eve, my cousin’s 17-year-old son, Aiden, who successfully battles a nervous system disorder, was given the surprise of a lifetime when New England Patriots tight end Rob Gronkowski presented Aiden and his family signed memorabilia and tickets to Super Bowl LIV during the New Year’s Eve with Steve Harvey: Live from Times Square special on FOX, all courtesy of the Make-A-Wish-Foundation.
Aiden and his dad, Shawn, attended the NFL Honors Ceremony alongside legendary NFL players past and present like Jerry Rice, Ray Lewis, and Deandre Hopkins, among others; the Super Bowl between Kansas City and San Francisco; and spent time with Super Bowl MVP, Chiefs quarterback Patrick Mahomes in Walt Disney World the next day.
I’ve experienced some super moments of my own with Aiden.
I remember covering a high school baseball game one day a few years ago at Ware’s Memorial Field, a contest pitting one of our local teams against the Indians. When I arrived at the ballpark, Aiden emerged from the stands and gave me a hug, making me feel like a local celebrity. But there is another memory that will last forever.
In the days immediately following my father’s sudden death, Aiden literally gave me the shirt off his back, handing me a Patriots Super Bowl Championship shirt, which his father bought for him. Amidst my grief, I put it in my drawer with the rest of my T-shirts.
The little things we take for granted.
One month ago, Boston Red Sox All-Star outfielder Mookie Betts was shipped to the west coast and became a Dodger. A few days ago, the unthinkable happened when Tom Brady announced his plans to leave New England in a heartfelt letter to fans via twitter. A day later he was the quarterback of the Tampa Bay Buccaneers. Then, on Friday, Red Sox ace pitcher Chris Sale announced plans to undergo Tommy John surgery, ending the southpaw’s 2020 season and likely a portion of 2021 too.

The little things we take for granted.
Life as we know it has come to a halt as the world attempts to battle the coronavirus, or COVID-19. Nearly every sporting event from the youth and high school level to college to the pros has been halted in an attempt to slow the spread of the virus. Many schools are closed indefinitely. A major portion of our country’s workforce is confined to their homes. Emergency responders and health care workers continue to risk their own health and well-being to treat the public. Churches, restaurants, shops, malls and bars are shut down. (As of press time, many area restaurants were still open for takeout or delivery service.)
The little things we take for granted.
When life finally does return to normal – and it will – I will cherish the smack of the baseball bat every time one of our local ball players gets a hit … the roar of the crowd when every one of our football players scores a touchdown … every “Happy Birthday” song … every kiss and hug of a family member … and every handshake and fist bump shared among friends.
I urge you to do the same.