The town of Southwick has had Blackboard Connect for at least the past 10 years as their town-wide emergency alert system. Blackboard Connect is a tool to alert town residents or town employees to town-wide events as well as emergencies that may be occurring within the town or the surrounding area. 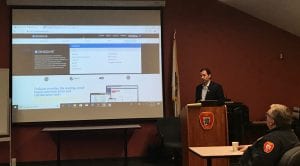 At the LEPC meeting on Thursday, Peter Applegarth, a Regional Sales Manager for OnSolve, introduced OnSolve’s own emergency notification system, Code Red, to the members of the LEPC.

Continuing to explain the impact Code Red can have on a community, Applegarth noted that the system has been used for major emergency events, like the Boston Marathon bombing in 2013. Students, staff, and faculty at MIT (Massachusetts Institute of Technology) were notified of a lockdown due to the bombing through the Code Red system.

Operating since 1998, the Code Red system began as telephone system to make calls to residents about news for state and local government. Now, the Code Red system doesn’t just make town-wide calls to residents, it’s customized for the town for a specific function. Applegarth informed the LEPC that if there’s a water shut-off issue in a certain neighborhood in Southwick, Code Red can be set up to only alert the affected residents and not the entire community.

Members of the Southwick Local Emergency Planning Committee are seen looking on as Peter Applegarth of OnSolve presents information on a prospective emergency alert notification system. (Photo by Greg Fitzpatrick)

Code Red also features a mapping system that can pinpoint locations in that may need to focus on in case of an emergency. There’s also the option for a mobile app, which Applegarth regarded as a tool that can alert people wherever they are.

“Your citizens are notified outside their community as well,” said Applegarth.

Applegarth pointed out to that it’s not just the services Code Red can provide, it’s also how the system can notify residents prior to disasters, storms, or other emergencies in order to allow proper preparation.

Karl Stinehart, Town of Southwick Chief Administrative Officer and member of the LEPC, told Applegarth that the town tends to use Blackboard Connect for a lot of events or notifications that might be unnecessary at times.

“Our criticism right now is we’re overusing it,” said Stinehart.

At this time, Southwick pays about $8,000 per year for Blackboard Connect. Discussing pricing options for Code Red, Applegarth told the LEPC members that by looking at Southwick and depending on what they would want to do, it could probably cost anywhere from $3,500 to $4,500 per year.

Stinehart added that he’d be looking for a recommendation from the police and fire departments if it’s decided that the town wants to pursue having a new emergency alert system.