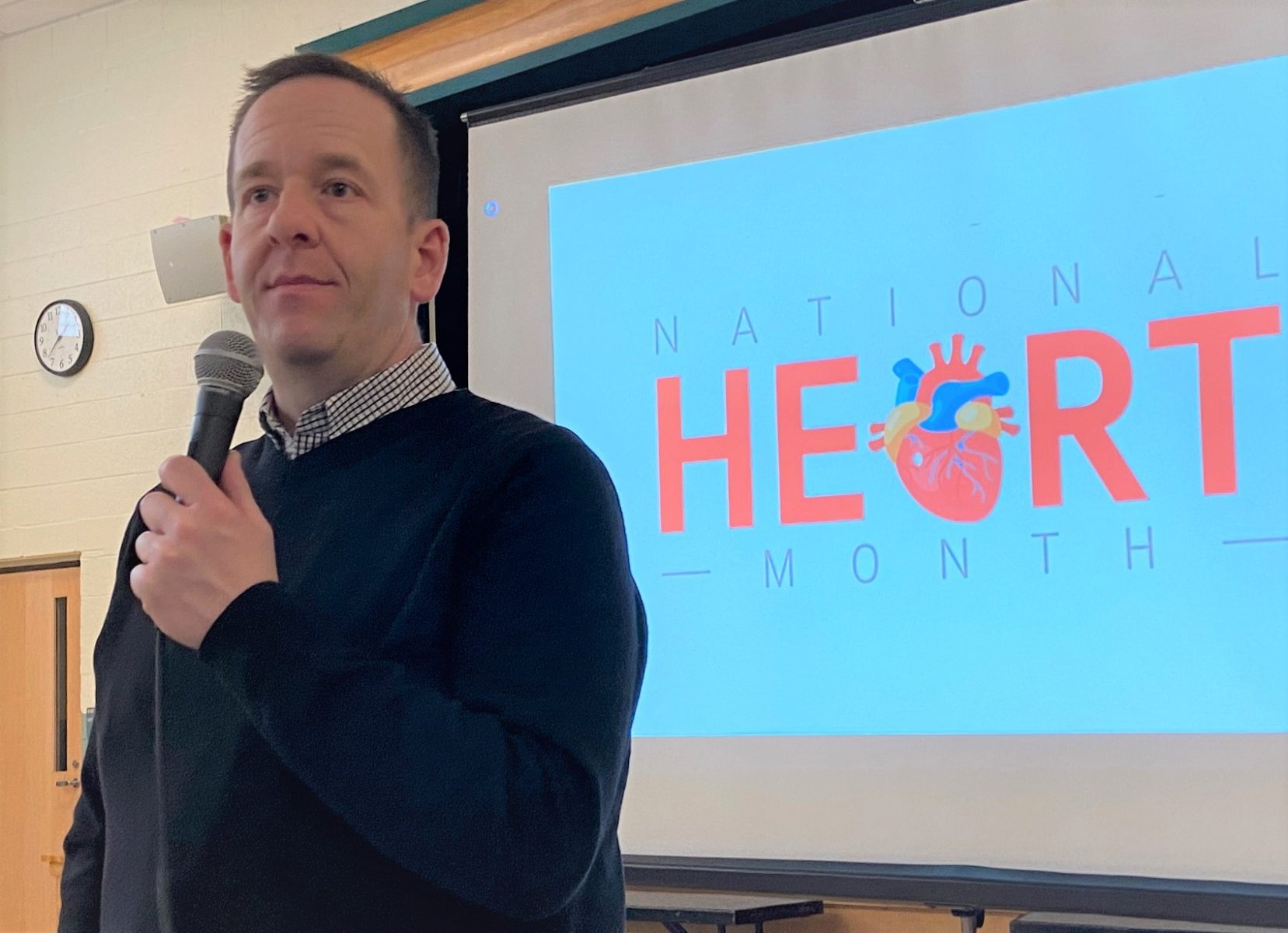 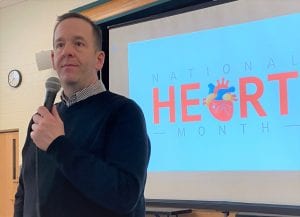 Band teacher Joseph Whalen surprised students in grades five and six Feb. 12 with a presentation on National Heart Month. Not only was it surprising that the band teacher was talking about health, but he revealed he is a heart transplant recipient.

Whalen was born with an AV Block, which means the electrical signals that tell the heart to contract are partially or totally blocked between the upper chambers (atria) and the lower chambers (ventricles).

“Doctors knew this before I was born,” he said as students in the auditorium gasped and looked at each other in surprise.

Whalen said it wasn’t until he was about the same age as his students that his heart condition became a problem. When he was born, his parents asked doctors what they could do for him. They were told there was nothing they could do until it became an issue for Whalen and that they would know when it was time to do something.

That day came when Whalen was walking his bike up his friend Brad’s steep driveway. 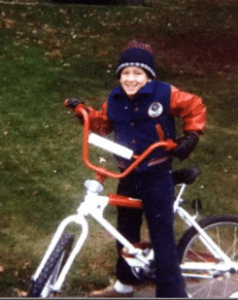 A young Joseph Whalen on the bike he rode the day he discovered he needed his first pacemaker. (JOSEPH WHALEN PHOTO)

“I remember it was July 14 and it was super hot,” he recalled. “I’d played 18 holes of golf with my dad at Shaker Country Club – we walked – had lunch and rode my bike to my friend Brad’s house.”

While walking up Brad’s driveway when heading home, Whalen collapsed.

“I was tangled up in my bike and someone thought I’d been hit by a car,” he said.

He was rushed to the hospital and it was determined he needed a pacemaker to keep his heart pumping properly.

Whalen would have more pacemakers in his lifetime. And as music became more important to him, he found less time to ride his bike. He said he simply stopped taking care of himself.

“I wasn’t eating healthy,” he said. “I wasn’t riding my bike. I got lazy and started putting on weight.”

Whalen said his weight crept up to over 300 pounds and he decided he needed to do something about his health and started riding his bike again. But it wasn’t enough. His heart was working in overdrive and couldn’t keep up. He received an implanted cardio defibrillator, which could shock his heart if it stopped, but still needed a heart transplant because he had congestive heart failure.

Whalen continued to ride his bike and make healthy choices. He forged friendships with other heart transplant recipients and today lives a full, healthy life. He still plays music, teaches and rides his bike.

Students came away from the presentation with a new perspective on heart health, a lesson that will continue throughout the month by Health Teacher Julianne Donohue.