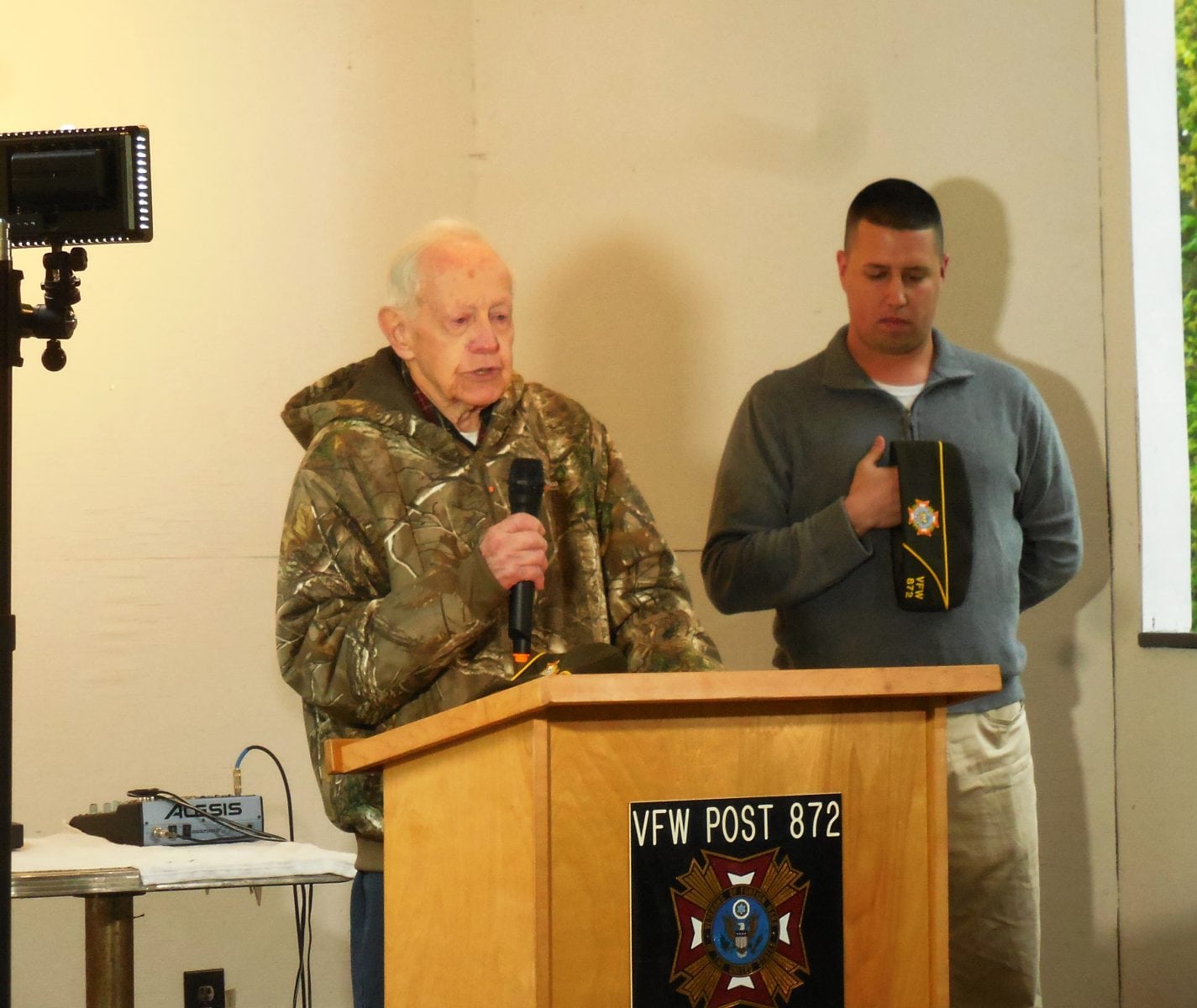 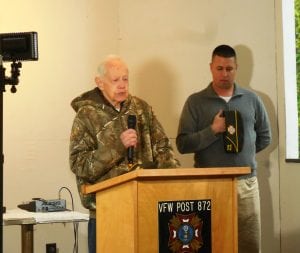 SOUTHWICK – The theme for the donors’ dinner and community event hosted by VFW Post 872 on Saturday was “The Community Remembers.” The event was held to honor the memory of the three combat veterans killed in action, who were graduates of Southwick High School: William R. Alamed, Class of 1966; Steven B. Wentworth, Class of 1981, and Travis J. Fuller, Class of 1997.
Post Commander Troy Henke said the event was held in part as a thank you to the sponsors who made possible three new plaques honoring the servicemen as well as the wall lettering which will be displayed in the new Veterans Memorial in the foyer of the Southwick Regional School to be dedicated on May 21.
“It went very well. We were very, very happy with the event last night,” Henke said on Sunday. He said 100 people attended both the dinner and the community event. He said they wanted to invite members of the community, because the 9 a.m. dedication at the school will not be open to the public.

A thank you dinner for VFW Post 872 donors preceded the community speaking event.

Invited to speak to the community members who gathered following the dinner were Kyle Reyes of Silent Partner Marketing in Manchester, CT and Salvatore DeFranco, a former Navy Seal and owner of Battle Grounds Coffee in Haverhill, MA, both very active and supportive of veterans causes.
Reyes, a 2002 graduate of Southwick Regional, was originally invited by Henke and the VFW to participate in the May 21 dedication at the high school, but was asked not to speak by the administration due to his conservative political activism. However, none of the controversy was evident at Saturday’s event.
“The controversy did start to overshadow things a bit, but we redirected the focus back to the memorial of the three men, and the Gold Star families,” Henke said, adding that they had never lost that focus. “Everybody was there for the right reasons.” 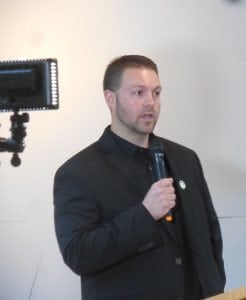 Kyle Reyes speaks during the community portion of the VFW pre-dedication.

Reyes spoke about his awakening to public service after 9/11, while he was still in high school. He said while his brother Luke joined the armed force and is now serving in the Coast Guard in Bahrain; he has become involved in supporting veterans and police officers.
Reyes also spoke about the difficulties many veterans face following their return from deployment. “I’ve watched a lot of veterans return from Iraq and Afghanistan. They’ve survived the battle there, only to lose the battle when they get back,” he said, pledging to be a resource, and help veterans find the resources they need.
Reyes told the group he had gone with DeFranco earlier in the day to a 22-mile hike for veterans, to honor the 22 veterans who lose their lives every day. He also mentioned that although that number was being disputed, some saying 20 or 25, it’s not important. “Today we honor those who gave their all in service to their country,” Reyes said.
DeFranco spoke about some of the fundraising he’s done for veterans’ causes through the Battle Grounds coffee shop in Haverhill. “We don’t try to highlight the differences; we highlight the commonalities. Bringing that together, that’s how we help each other,” he said.
After their brief remarks, both men said they were honored to be invited to speak. “It was a blessing to be with these guys. It’s sad that something that was never meant to be political, turned into something so controversial,” Reyes said. 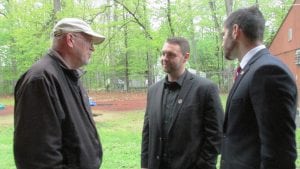 Southwick Navy veteran Steve Brudzinski speaking with Kyle Reyes and Salvatore DeFranco following the community evemt, Brudzinski said he was not a member of VFW Post 872, but he planned to be.

“I was going to speak two to three minutes at the high school,” he added. “A lot of members of my family served. Arguably, it’s the most selfless thing you can do. They are so selfless, so courageous, yet we do so little for them. My company decided to provide as many resources to them as I could.”

Before the ceremony started, Granville resident Jenny Francis talked about her brother Travis Fuller, who was killed in action in Iraq in 2005, and is one of the veterans who will be remembered in the Veterans Memorial Foyer.
“It seems like it was just a little while ago, but it was in 2005. My daughter was just 9 months old when he was deployed; now she’s a teenager,” Francis said. She also said that although she was worried how her brother would adapt once he returned home, she had been “100 percent certain” that he would return.
Francis said her brother had previously been honored in the Granville Village School by the Travis Fuller Memorial Gymnasium. Now, she says she is happy that the VFW and the district are naming the new memorial the “Veterans Memorial,” not the Travis Fuller Memorial. 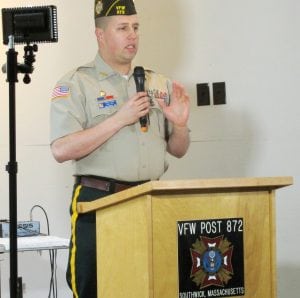 “I’m really pleased the VFW came up with that one. My brother would have wanted it that way,” Francis said, adding that her whole family will be at the May 21 dedication.
Henke said the closing of the Granville Village School was the catalyst for the new memorial. He said the burial flag of William R. Alamed, Class of 1966, who was killed in action in Vietnam in 1970 and was also on display at the school in Granville, will be returned to his mother.
Alamed is also being remembered by a plaque in the Veterans Memorial, as is Steven B. Wentworth, Class of 1981, who was killed in action in Beirut, Lebanon in 1983. Although the plaques were on display at the dinner, Henke asked that no photographs be taken until the May 21 dedication.