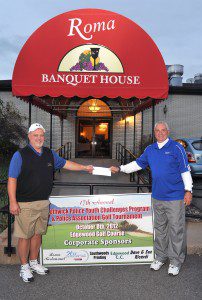 William Lis, left, of Southwick, receives a ceremonial check for $5,000 from Kevin Bishop, co-chair of the 17th Annual Southwick Police Association Golf Tournament, during a dinner and awards ceremony at the Roma Restaurant last night. Lis won the money after sinking a hole in one on the 17th hole of the Edgewood Golf Course yesterday. (Photo by chief photographer Frederick Gore)

SOUTHWICK – Southwick resident William Lis has been golfing in town a dozen times a year for much of his life, but Monday’s outing provided the ultimate payoff.
Lis, 43, hit a hole-in-one on the 17th hole at Edgewood Golf Course, using an eight-iron to drive the ball 165 yards. The shot earned Lis a $5,000 prize in the 17th annual Southwick Police Association Golf Tournament, an event designed to raise funds for local sports teams, scholarships, and positive youth activities.
“It was a great day and a good cause for the D.A.R.E. program,” Lis said. “This was a good one.”
Lis said did not even realize he had made his first hole-in-one.
“I started getting close to the green and saw the ball was not visible,” he said. “I said ‘holy cow’ when I saw the ball was behind the pin, sitting at the bottom of the cup. Then I gave a couple of cheers.”
Lis, who is a longtime employee of Johnson Packings in East Longmeadow, lives in Southwick with wife Darla and his two children, Joshua, 11, and Amanda, 7.
A total of 38 foursomes, or 152 golfers, participated in the annual event. This year, the fundraiser netted $5,000.