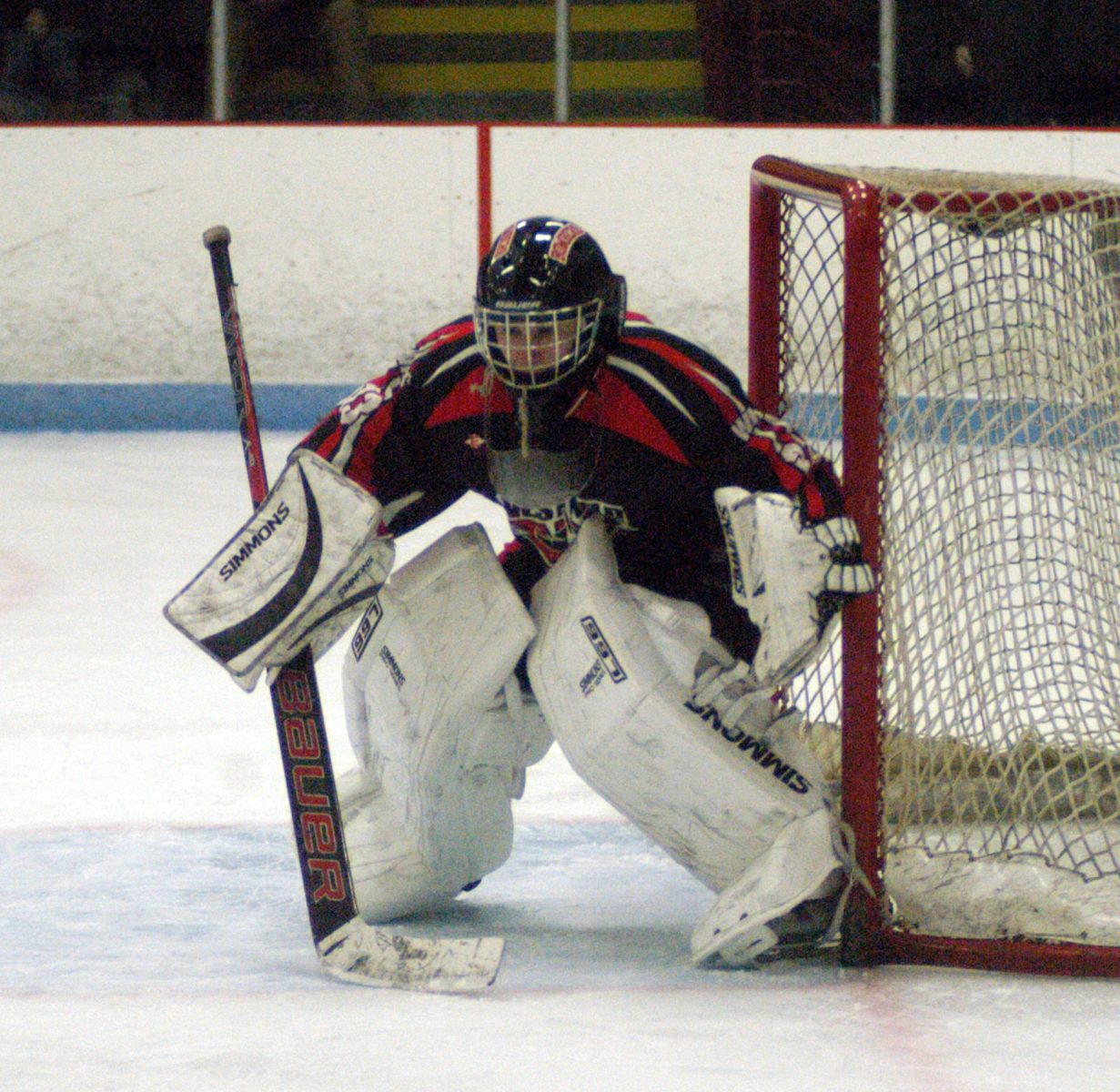 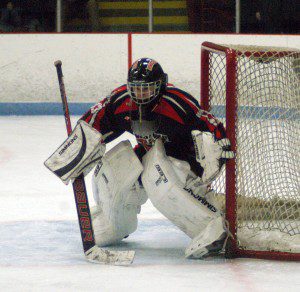 Westfield High School goalie Nick Liberto, seen here protecting the goal during a 2012-13 regular season hockey game, and the Bombers will take on the East Longmeadow Spartans in the Western Massachusetts Division 3 championship Thursday night at the Olympia in West Springfield, beginning at 8:30. (Photo by Chris Putz)

WESTFIELD – The Westfield and Longmeadow high school hockey teams have won every one of the western sectional championships in Division 3 over the course of the last decade. The Bombers would like to keep it that way.
On Thursday, top-seeded Westfield will attempt to win its eighth title in the last 12 years when it plays No. 2 East Longmeadow in the Western Massachusetts D3 hockey finals at the Olympia. The puck will drop at 8:30 p.m.
“We’re there again,” Westfield coach C.B. “Moose” Matthews said after his team advanced with a 2-1 overtime win over West Springfield in the semis last Saturday. ‘It’s going to be another battle. It always is, especially in the semifinals and finals. They’re close tough, physical games.”
Westfield, which last won the title in 2011, is attempting to make amends for a 5-3 loss in last season’s finals. In that game, Longmeadow, with inspired play by sensational freshman Charlie Kelleher, scored five unanswered goals to stun the Bombers. But Kelleher transferred to a prep school, and the Lancers fizzled out this season. They have been replaced by the Spartans of East Longmeadow.
“We coughed it up last year. That left a bad taste in our mouths.”
This season, Westfield outskated the competition nearly every game – save for a few brief mental lapses – compiling a regular season record of 14-2-2. During that span, the Bombers shredded the Longmeadow Lancers 10-1 and 5-2, swept the regular season series with East Longmeadow 5-1 and 4-2, and posted independent victories against some of the best teams in the state.
Westfield struggled a bit with East Longmeadow in the first meeting January 11 as both teams played a scoreless first period. But Mike Santinello exploded for a hat trick over the final two periods to help the Bombers pull away. The second meeting was even a bit closer, 4-2.
East Longmeadow won its semifinal game in overtime, 3-2, sending border-rival Longmeadow packing.
Based on the recent nail-biters, and the fact that East Longmeadow continues to play Westfield tough, the championship figures to go down to the wire.
Said coach Matthews: “We’re going to be ready.”